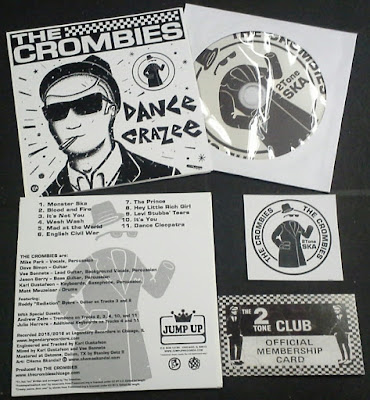 I've been hearing about how great The Crombies are--and waiting for this album to come out--for what's seemed like an eternity. So, it's a thrill/relief to report just how fantastic and enjoyable their debut Dance Crazee is! The Crombies' single-minded mission is to make rollicking, good-time 2 Tone music, whether they're covering vintage JA and late 70s UK ska, versioning songs that are a bit further afield, or creating new 2 Tone-like classics. And they succeed brilliantly! (Based on what they've captured in these recordings, The Crombies must be one hell of a good night out--come to NYC whenever you can!) So, put it on, crank it up, and be ready to sing along and move your feet!

Dance Crazee opens with a nod to The Toasters' "Frankenska," employing the same maniacal laughter over the first few measures of J.S. Bach's "Toccata and Fugue in D Minor" during the intro to The Crombies' boss version of The Munsters' theme, which they've re-titled "Monster Ska." (The Forest Hillbillies also recorded a ska version of this song back in 1986 for Gaz's Rockin' Records.) This is followed by a rabble-rousing, knees-up take on Niney the Observer's dread vision of "Blood and Fire," re-recorded for Dance Crazee (this song also appeared on The Crombies' 2011 debut single along with "Mad at the World").

The lurking menace always present in Mike Park's vocals really comes through on the one Crombies original on the album, the bitter "It's Not You" ("Now as I walk along this place/I used to walk along with you/I smell the scent of your perfume...I double-take, but it's not you/It's not you"). The Crombies' take on Prince Buster's "Wash Wash" (which itself is a cover of Beasley Smith's and Haven Gillespie's 1949 pop-spiritual "That Lucky Old Sun"; fun fact--mod rhythm and blues fave Georgie Fame played keys on the 1964 Prince Buster recording of "Wash Wash") veers fantastically into blissful jump blues territory and sounds like something that wouldn't be out of place on More Specials (it's similar in vibe and spirit to "Enjoy Yourself"). "Mad at the World" is a repurposed 1998 Deal's Gone Bad fave (several Crombies were in DGB) about, if I can paraphrase Homer Simpson, alcohol being the cause of and solution to all of life's problems: "Can't drink enough to get my head right/Know what they say/Some win, some lose/Finish up to a brand new surprise/Movin' sidewalks, street lamps whirl/Spitting fire till I see your eyes/I'm mad at the world!" 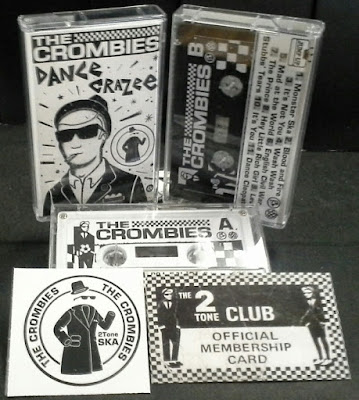 The Crombies' defiant cover of The Clash's "English Civil War" (where Joe Strummer borrowed the American Civil War-era song "When Johnny Comes Marching Home" to issue an anti-fascist warning in reaction to the rise of the National Front in the UK in the late 70s) was previously featured on the excellent and very essential The Clash Goes Jamaican double LP/digital compilation (Golden Singles Records, 2013), as well as a split single with the Green Room Rockers (who covered "Clampdown"). In The Crombies' hands, "The Prince" becomes a full-fledged ska song with a serious, danceable groove--that may top Madness' awkward, herky-jerky original! The Specials' Roddy Radiation adds his distinctive rockabilly ska guitar sound to his own composition of a fallen young woman, "Hey Little Rich Girl" (Roddy's also featured on "It's Not You").

Things shift dramatically with The Crombies' stellar reading of Billy Bragg's  "Levi Stubbs' Tears," a despondent tale of a woman perpetually down on her luck who sort of makes it through life with the music of The Four Tops giving her a measure of comfort (it's from Bragg's 1986 album Talking to the Taxman About Poetry). Their choice of this cover and their interpretation of it are the highlight of the album--and suggest many more great things to come. I wasn't that familiar with Toots and the Maytals' "It's You" before hearing it on this album; this great rendering is something you might expect from The Specials, circa 1979. The Crombies' party finishes with a sweet cover of Prince Buster's "Dance Cleopatra" that sounds like Gaz Mayall's Trojans with Dick Dale on lead guitar.

While The Crombies' Dance Crazee may not be revolutionary (it doesn't aim to be), it is filled with irresistibly fun and expertly (and lovingly) crafted 2 Tone ska that you'll want to listen to over and over. And, these days, everyone could use a little more upbeat, smile-inducing, "more life!" music in their lives.