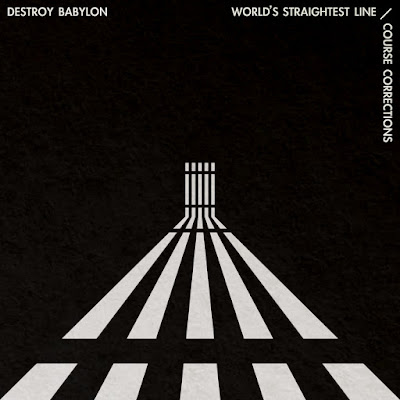 Destroy Babylon--the powerhouse reggae/rock/post-punk band led by the Beaudette brothers when they're not doing their dub thing with Flying Vipers--have released a digital single that is a follow-up to their 2017 concept album Shapeshifters (read my review of it here). That album was about the Pandora's box of white supremacy, disinformation, lies, conspiracy theories, and potential for political violence that was unleashed by Trumpism and DB's latest extraordinary single "World's Straightest Line" b/w "Course Corrections" (Digital, Music A.D.D., 2021) continues in a similar vein with songs about the ongoing degradation of our society and disintegration of the social contract. At first, I thought "World's Straightest Line" (a fierce punk rock/hardcore-ish track) was about America's war on drugs, the mass incarceration of Black citizens, and the poverty-to-prison pipeline, but then realized it's about casting social media as a pusher--how it taps into people's lurid, insatiable desire for intimacy with other people's worst moments (and what it extracts from them/us in turn). If the post-punk cut "Course Corrections"--about giving in to authoritarian rule in order to survive ("If you want peace, don’t spare the rod/Closed fist--your new god...I have seen the awful truth/I would do the same to you")--had come out a couple of decades ago, you would have thought it was a good take on 1984. But listening to it in 2021, when it has become crystal clear that the right wing in our country is openly working to dismantle American democracy, is a chilling experience. The distorted, dubby, guitar effects that slip in and out of the shadows of this song are incredibly effective; they're the sounds of a slow-motion dystopian nightmare coming true.

Sean Flowerdew's Happy People Records is in overdrive lining up some of the best ska, rocksteady, and reggae singles one could hope for; I believe they're almost up to their 100th release already! (US fans--did you notice that there's a new Happy People Stateside imprint, so you can order these great records and not get killed by international postal rates?) One of the latest singles is Roger Rivas' terrific "Heading West" b/w "Last Goodbye" (7" vinyl single/digital, Happy People Records, 2021), which come from Rivas' out-of-print 2014 LP Last Goodbye (which is still available digitally on Bandcamp). "Heading West" is a bright, bubbly Western reggae/rocksteady trip to a better place that promises even better times, while "One More Dance" sounds a bit tentative and melancholy, as if someone's holding out hope that a rift can be patched up before the end of the night with a close and silent slow dance.
+ + + +

I meant to write about the John Roy-driven Smoke and Mirrors Soundsystem project much earlier this spring. This is the relaunched New Normal Collaboration project that released the excellent Quarantined on Easy Street last fall (read my review of it here), but ran into issues with one of the people co-leading the effort. Roy (of '90s ska act The Unsteady) has since re-recorded all of the drum tracks and remixed the album, and the new version--retitled Strength in Numbers--can be heard/bought here (at some point soon it will be released on vinyl, too). Smoke and Mirrors Soundsystem also has been working on an album of awesome ska/reggae covers of '80s classics like Bowie's "Let's Dance," Echo and the Bunnymen's "Killing Moon," and Tears for Fears "Mad World," as well as cuts from Junior Byles ("Fade Away"), Sam and Dave ("When Something's Wrong with My Baby"), Smokey Robinson & The Miracles ("Second That Emotion"), Edwin Star ("25 Miles"), Spencer Davis Group ("I'm a Man"), and more.

A few weeks ago, Luqman Brown (from the NYC "soul core" NYC band FunkFace, which includes members of Beat Brigade) reached out to let me know that another band of his Dope Sagittarius is re-releasing a special edition of their latest album that features Roy Radics' last recording. Radics, of course, was the beloved lead singer of the NYC ska and reggae band The Rudie Crew who passed away unexpectedly in the prime of his life in 2016. The Dope Sagittarius track that features Radics is "Sacred Places"--the title track of this incredible funk-electro-hip-hop-rock band's latest album (which is available from Buddahbug Records on vinyl and digital via Bandcamp). Radics delivers some wickedly fantastic toasting during a dancehall break in this cut about the place you're transported to when you lick the chalice ("I'm stuck between the now and the sacred space"). He sounds so good here and hearing him do what he did so well will make you miss Radics all the more. Anyone who knows about and is into the Black Rock Coalition bands (who incorporate "the spectrum of Black music" into their songs) like Living Color, 24-7 Spyz (I caught them opening for The Untouchables years ago and they were on fire!), FunkFace, and Fishbone will want to devour Dope Sagittarius' Sacred Places.