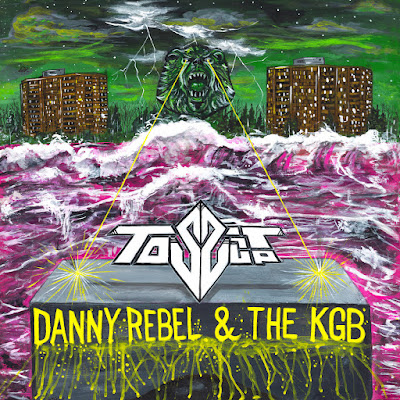 In the "I still learn something new every day" category comes the great new trad-leaning ska single from Danny Rebel & The KGB that's a preview of their new album (!) Toss It Up, which is being released on Stomp Records on May 28th, 2021. It features five new songs and five corresponding dubs by Victor Rice (you can pre-order the digital album now; is it too much to hope that this will be issued on wax?). Employing a term for female genitalia that I've never encountered before, "Whispering Eye" is unapologetic in its direct and unadorned expression of lust ("We don’t need this love (I’ll save you the pain)...You don’t have to call (just call out my name)...All I really want is your whispering eye"). As one wry FB commenter replied to Danny about his new song: "rent a room!" (Danny Rebel & The KGB's most recent album was 2017's incredible Lovehaus (read my review of it here), which still needs to be released on vinyl, if there's any justice left in this world.)

Led by Swiss-Italian trombonist Mattbrass and producer Jackayouth, Swiss traditional ska band Winds of Matterhorn's superb new self-titled debut EP (12" vinyl/digital, Fruits Records, 2021) sounds like what one imagines the follow-up to Rico's incredible Jama Rico (with Jerry Dammers and Dick Cuthell again at the helm) would have been had all the stars aligned back in the '80s. This EP has the same wonderful vibe and sound (who knew the Swiss Alps were like the hills of Wareika?). Winds of Matterhorn's excellent original instrumentals are named after the four elements ("Earth," "Air," "Fire," and "Water") and lend this EP a theme that gives one's imagination a bit of direction when listening to these marvelous tracks. And while you're picking up Winds of Matterhorn's new EP, make sure to grab a copy of 2 Tone's vinyl reissue of Jama Rico (out this June), if you don't already have it!