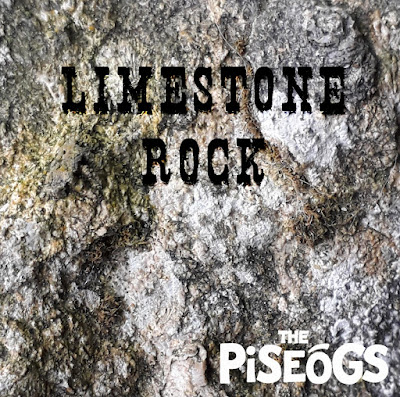 Hopefully, you've already been introduced to The Piseógs via Happy People Records' terrific global ska comp Rudies All Around, Volume 2 (their track "Don't Grow Up," from their debut EP Mental Space Invader's Ball, is a highlight). If not, you should know that they're a fantastic traditional-leaning ska and rocksteady band from Sligo, Ireland (whose sound is a mix of The Trojans and Bim Skala Bim) and they've issued a new, you-shouldn't-miss EP titled Limestone Rock (Digital, self-released, 2021). It's a subtle but profound concept EP of sorts with songs about pride, sin, and death--with limestone's symbolism working on many levels. Limestone, of course, makes up about 65% of Ireland's land mass (and was formed by ancient coral reefs hundreds of millions of years ago when the region was submerged under warm ocean waters); it was the building material used for many medieval cathedrals and churches; and when you burn it, its yields lime, which is poured on dead bodies to help cover the smell of decay and hasten decomposition (plus the title is a nod to many of the famous Jamaican riddims, like "Rockfort Rock" and "Real Rock").

The EP opens with a sweet cover of Justin Hinds & the Dominoes' classic "Higher the Monkey Climbs" ("...the more he expose"), which is about the dangers of not leading a humble and righteous life (key line: "He that exalts himself shall be abased/Grief always comes to those who love to brag the most"). The beautiful, if resigned, "Up She Flew" is about the death of a female French Resistance fighter during the D-Day/Operation Overlord invasion of Normandy who previously had been in a romantic relationship with an Allied paratrooper. One of the lyrics refers to Sainte-Mère-Église, the first town liberated from the Germans, where many paratroopers were shot as they descended into the hell of war (part of the town was on fire and lit up the night sky), or their parachutes were snagged in trees or utility poles (and they were shot). Most famously, one American's parachute was caught on the town's church spire and he pretended to be dead for several hours (the Germans eventually discovered he was alive and imprisoned him, though he later escaped and rejoined the US troops and the fight to liberate Europe). The song's also about the inevitability (and commonplaceness) of death and loss; the struggle to lead our lives in circumstances when we have little agency; and grappling with the fact that we'll never have answers or be able to give meaning as to why some things happen.

However, despite it all, the narrator is sure that she ends up going to Heaven ("up she flew"). 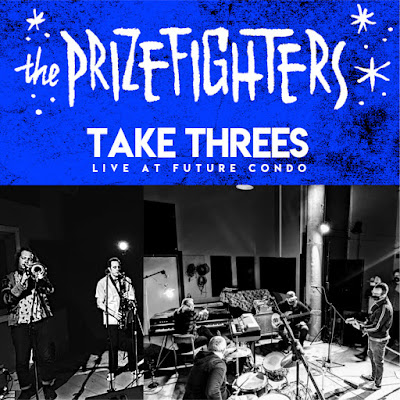 I happen to keep a record in my head of all my wrongs, so "Tally Your Sins"--where we're urged to take a look at our imagined written log of sins--resonates. Of course, accepting responsibility and seeking forgiveness are the only way forward ("Secure no happy future where you can escape/The past keeps tagging along/Running riots inside your head/'Til you admit you were wrong"). "Blackthorn Shuffle" is a cheery (and ironic) instrumental; in Celtic mythology, the Blackthorn tree has been associated with overcoming strife, the Celtic goddess of winter Cailleach, witches/witchcraft, and a Christian belief was that the Devil would choose his victims/followers by pricking them/drawing their blood with a blackthorn thorn). The terrific reggae instrumental "Ghost Beat" features some great echoey percussive sounds that conjure images of unseen spirits making their appointed rounds, while "Limestone Rock" is lovely ska instrumental that pays tribute to the island that's their home and the stone it provides to build the structures that have helped give meaning and purpose to countless lives over the years.

Minneapolis' wonderful ska/rocksteady group The Prizefighters used some of their pandemic lockdown time to record a series of truly excellent short live performance videos shot in a recording studio (they can/should be watched here, here, and here), which they've also released as a nine-track digital album titled Take Threes (Digital, self-released, 2021). It features renditions of tracks from their most recent--and really superb--studio album Firewalk (which I reviewed here), plus a haunting ska version of Trini Lopez's "What Have I Got of My Own." I've never had the chance to see/hear The Prizefighters live, but desperately want to now, as they've clearly got the goods live!
+ + + +
Posted by Steve from Moon at 2:54 PM

Email ThisBlogThis!Share to TwitterShare to FacebookShare to Pinterest
Labels: Baby Earl and the Trini-Dads, Bim skala bim, Duff Review, Justin Hinds and the Dominoes, The Piseógs, The Prizefighters, The Trojans