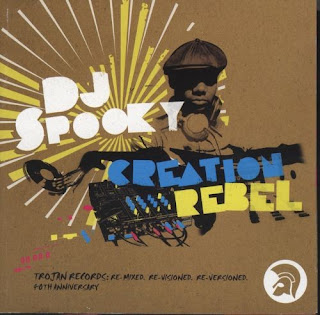 Even if DJ Spooky’s most excellent romp through Trojan Record's vaults wasn’t so damn good, Creation Rebel would be notable just for the fact that it’s not a rehash of the same classic reggae and skinhead reggae tracks that seem to appear on reshuffled Trojan compilations every few years. (Seriously, how many times can “Young, Gifted and Black” appear and re-appear on their comps?) And unlike the recent Trojan compilations of cuts selected by DJ Spooky (DJ Spooky Presents - In Fine Style: 50,000 Volts of Trojan Records), Radiohead’s Johnny Greenwood (Johnny Greenwood is the Controller), and Super Furry Animals (Furry Selection: Luxury Cuts Of Trojan Chosen By A Super Furry Animal) which were interesting for what they revealed about their individual tastes, Creation Rebel features truly new material of sorts: DJ Spooky's top-shelf re-mixes and mash-ups (vocals from one song married to music from another) of songs by Lee “Scratch” Perry, Augustus Pablo, Bob Marley, Tapper Zukie, Wayne Smith, Dawn Penn, and more.

If you are a ska and reggae purist, this ain’t for you. Stop reading now. Scroll down to the next post. However, if you’re musically open-minded (and I’m not condemning you if you’re not), Creation Rebel is a compelling mix of roots reggae, dub, dee-jay/toasting, dancehall, and hip-hop (which, if you didn't know, was created by DJ Kool Herc, a Jamaican who moved to the Bronx when he was 12 and built rap/hip-hop on such reggae traditions as toasting over a rhythm track blasting on a sound system), as processed through the mind (and computer) of the master turntablist. In many ways, this record perfectly illustrates the evolution of Jamaican music and culture—how it constantly “versions” itself (re-using rhythm tracks from popular songs behind new vocals, or remixing just the rhythm tracks to create a dub version), mining its incredibly rich musical past to create a new sound for the future.

While there is not a bum cut on Creation Rebel (of course, the source material is spectacular, but in a lesser DJ’s hands this album could have turned out very poorly), some cuts are truly inspired, such as the brilliant mash-up of Mutabaruka’s spoken word poem with a sample of the Lee Perry produced “I Killed the Barber” by Dr. Alimantado (which itself uses the rhythm of John Holt’s “Ali Baba”) on “Dis Poem Burns Babylon v2”; the re-mixing and roughing up of the instrumental track of "No, No, No" (where the bass is distorted to the point where it’s lost its tone and become a percussive instrument) under Dawn Penn’s silky vocals; and Augustus Pablo’s "Far East sound" classic “East of the River Nile” is partially transformed into a track you would expect to hear booming out of a hip-hopper’s Escalade. Bob Marley’s “Soul Rebel” is given an upbeat percussive underpinning, while the Lee Perry/Tapper Zukie “Revolution Dub” has a chugging Eurotrash disco beat prodding you on to dance on the way to smash the barricades (sounds much better coming out of your speakers/earbuds than it does in print). And the choice sampling throughout this album (particularly on the awesomely dense title cut) will send you scrambling through your record collection to identify the original cuts.

The spirit—and in many cases the songs or productions—of Lee Perry flows throughout this record, which makes sense: both Scratch and DJ Spooky are sonic innovators—madly tinkering in the studio as they completely deconstruct and reassemble music in order to capture the version of a track they hear in their heads and lay it down on tape or a hard drive. Like many of Scratch's best creations, you need to approach Creation Rebel with a mind open to new possibilities. If you do, the rewards to the listener are great. (A)