Ska News From Around the Globe: The Specials, LGB, Bad Manners, and Derrick Morgan 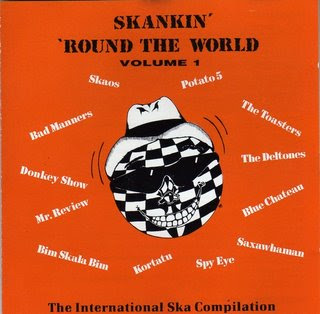 Editor's note: this here is a round-up of recent articles generally from the mainstream press that relate to ska music. Read on, rudies!

A posting on Virtual Festivals wonders whether the original line-up of The Specials will perform as the surprise act at Bestival on the Isle of Wight on September 6th (Madness filled this slot last year and Terry Hall is likely to perform with the Dub Pistols, so he'll be there anyway... ). I guess we'll soon find out. (Also, when is that new Madness album being released? I can't seem to find much about it on-line...)

The Fresno Bee reports that Let's Go Bowling will be playing a show this weekend in celebration of their 22 years together. The article also notes that the band is considering entering the studio to lay down new tracks.

The Essex Echo (UK) has a great feature on Buster Bloodvessel, who is turning 50 on September 6 (Happy Birthday Fatty!); recently dropped a mess of pounds (via gastric bypass surgery--they cut out 2/3 of his stomach!); and, as the accompanying photo proves, he sports the, ahem, longest tongue in show business (suck on that Gene Simmons!).

There is a similar article on Fatty in the Manchester Evening News.

The Boston Globe recently published an article about ska DJ Generoso Fierro who is producing a documentary on ska/rocksteady great Derrick Morgan. Over the summer, Fierro arranged to fly in Morgan to perform at the Middle East in Cambridge, MA (backed by Void Union) in order to capture him in action and interview him afterwards. Fierro previously has made a doc about the rocksteady guitarist Lynn Taitt, which was screened in Jamaica at the first Reggae Film Festival in February.
Posted by Steve from Moon at 8:09 PM

Good stuff! Man, I wish the Specials would play over here with original lineup. Shit, even seeing Madness again would be a treat! One of the best concerts I've been to back in the late 90s at irving plaza.

I wish I saw Bad Manners play in NYC in March but Pogues concert was that day.

Thanks for the comment ReadJunk (Brian?). I have the sinking feeling that we are going to miss out on some amazing Madness and Specials shows in the UK...(and I don't have the money or time to get my butt over there).

I feel like such a doofus-I didn't know that Fatty was playing NYC until it was over.

I remember back in '97 or '98, whenever Moon released "Heavy Petting," Bad Manners was supposed to tour the US and headline the New England Ska Festival. Their management kept promising me they were coming over, etc., but in the eleventh hour, they cancelled. A huge disappointment. That record would have sold much better had they toured (and it is a great record!)--and Fatty would have played some enormous shows (ska was still hot).

I'm glad he lost all that weight--I want the chance to see him again...

Yeah I'm Bryan :) Yeah I can't afford to go over anymore. I did twice to see Pogues and Levellers 2 Decembers ago. Madness play same week but already had like 3 or 4 shows that week haha. London certainly has a better music scene in December let me tell ya!

I remember when Bad Manners canceled NESF! I went to that because of them too! So I still haven't seen them live. But it was cool to see Hepcat headline it. And that album is really good. Love the song Down Berry Wood.

D'oh! Sorry to have misspelled your name! The UK ska and music scene seems to be so much better (next time you see a copy of Mojo, check out all the show adverts in the back and you'll be green with jealousy). Hepcat was great at the NESF, so the fans weren't too bent out of shape about Fatty. But I was still kind of bummed...

I've seen BM several times--and they were always terrific. You should make a point of catching them next time they are around (they're playing a lot in the UK right now, so maybe they'll be back here soon?). Was their last album from a few years ago--Stupidity--any good? Anyone?

Thanks for your feedback! I aims to pleeze! Plus, your comments help keep me going!