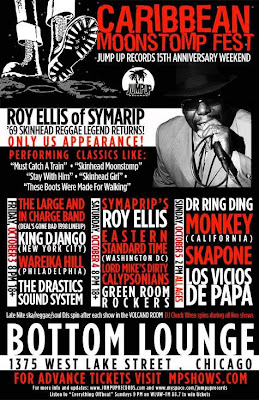 DGTS: What motivated you to put together the Caribbean Moonstomp at this point in time? Are you seeing a significant uptick in the popularity of ska in Chicago and the Midwest--or this more of a 'it's the label's fifteenth anniversary, so we're going throw a party?'

Chuck Wren: Basically, I think it's important to throw an event at these milestones in the label's history. We're pretty much the only label that has lasted this many years that has actually released new music in EVERY year of our existence. We never went dormant--we kept going! Yes, ska and reggae shows do pretty good here in Chicago. And bands like Deal's Gone Bad are finally getting the recognition they deserve on a national scale. But I didn't want to do a weekend with the same old bands time and time again--I wanted to do an event. That's why I decided to fly in Roy Ellis and do a one off show in Chicago. Roy is a living legend--and now that labels like Hellcat are making the "skinhead reggae" sound more well known, I figured it was time to bring in one of the genre's top marquee artists!

DGTS: What's your connection with Roy Ellis and how did you convince him to headline the festival? Is he one of your all time ska/skinhead reggae faves?

CW: Well, we released Roy's ("aka MR SYMARIP") album here in the states. Of course, getting into ska and reagge in the 80s you were heavily exposed to the skinhead subculture. Bands like SYMARIP were so influential with the 2-Tone generation, etc. And Roy's voice is still top notch and he is full of enthusiasm--just see his performances on YouTube. He was a natural choice--and I had been trying to get him to come to the states for the past two years!

DGTS: The other acts on each night's bill are all pretty incredible; how did you come to select them--are these some of you favorite acts on the scene, or were they the ones that were available and willing to participate?

CW: The list was longer! But, of course, not everyone can come. We were glad to have Eastern Standard Time step up to the plate to play and back Roy--and the whole Monkey (Jump Up will release their trad album this year) backing Dr. Ring Ding and then dragging his ass back to Cali for a full tour--well, that was some amazing timing and it worked out perfectly! The Large and in Charge band was my wacky idea because every year the indie rock festival, Pitchfork got seminal artists to play a specific classic album side. Public Enemy did "It Takes A Nation of Millions," Sonic Youth did "Daydream Nation"....why the hell can't the 1998 lineup of Deal's Gone Bad do their first album "Large and in Charge?" Now that's FUN!

DGTS: How many people are you expecting to show up at the Caribbean Moonstomp?

CW: If I had that information before each event, I would be a rich man that sleeps well! We picked the new Bottom Lounge because it can hold over 500 people comfortably--so let's go for that! Tickets are selling great, people seem to be traveling from all across the USA, so we hope that this will be quite huge!

DGTS: What's coming down the Jump Up Records pipeline for the next few months?

CW: New Pressure Cooker, Dub Is A Weapon, and who knows? I take each day as it comes! Thanks for the interest--come all to Chicago! Plenty of cheap motels on Lincoln Avenue!

Thanks to Chuck Wren for taking the time to do this interview. If you can, go see these bands!
Posted by Steve from Moon at 1:21 PM