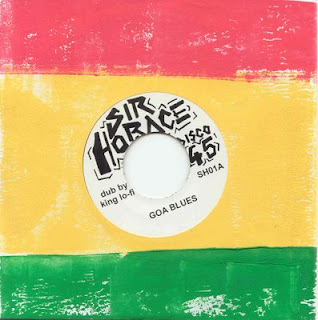 Yes, this single is by that Sir Horace Gentleman (aka Horace Panter), the bass player for The Specials and General Public--and what an amazingly good slab of wax it is. Sir Horace and friends deliver two terrific cuts of top-shelf, dubby instrumentals. "Goa Blues" sounds like something The Specials might have recorded with Rico and Dick Cuthell between their debut LP and More Specials (I kind of hate the "sounds like a great lost single" cliche, even if it is apt here)--it features an awesome ice rink organ; a great, propulsive, danceable rhythm (check this one out, DJs!); and killer horn solos. (Goa, by the way, is a small state in India, and this track does have a trippy, foreign-ness to it.) The flip side, Depleted Uranium Dub, is a more contemporary sounding tune, with a cool, slightly menacing geiger counter-ish sound effect to boot (indeed, depleted uranium is a highly toxic, radioactive dense metal--it's a waste product from the uranium that fuels nuclear reactors--which has been used in conventional munitions utilized by the US in the first Gulf War and in the Balkans that seems to poison both soldiers and civilians--and many other nations have these weapons in their arsenals, including the UK, Russia, France, Israel, Saudi Arabia, Egypt, Pakistan, and others). I highly recommend this single, which is a limited edition of 300 (plus the sleeve is hand painted--rasta colors!), so pick one up while they are still to be had...

"Goa Blues" is available through Rockers Revolt Records (Pama International's label) in the UK. (I ordered one through their website and received it in a little over a week--pretty damn quick for an overseas delivery!)

PS: I'm half way through Sir Horace's "Ska'd for Life," his book about being a member of The Specials. So far, it's a great read.
Posted by Steve from Moon at 8:21 PM

Just ordered the record last week, looking forward to it!
Going back throught the book again and finding its way better the 2nd time around.

Thanks for the nice review, can't wait to hear it.

Thanks for your feedback. You won't be sorry-this is a terrific single from Sir Horace. Really good stuff.

I bet "Ska'd for Life" is even better with a re-reading. Right now, I'm plowing through it just to see what happened. I'm at the point where they just finished their US tour that nearly killed them. Lots of good tidbits and insights...