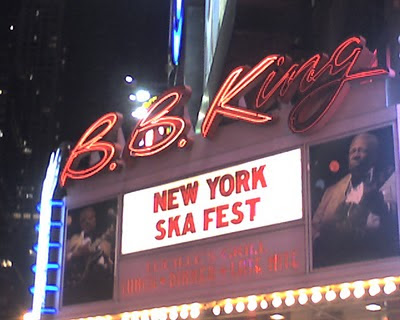 First of all, I'm sorry that I've been MIA for the past week. This is the time of year that I am busiest at work and everything else in my life is forced to go on hold (my wife even had a non-life-threatening visit to the ER to be embroidered with stitches and even she didn't want to tell me what happened because of what was going on at the job). And since it all turned out to be a bit more stressful than usual, I was dead beat by the end of day Friday and nearly bailed on going out at all. Fortunately, at my wife's prompting, a friend (thanks, Sid!) convinced me to catch the New York Ska Festival at B.B. King's with King Chango, Hub City Stompers, Bigger Thomas, Kofre, Beat Brigade, Skarioca, Floor Kiss, and Skarroneros--and it helped erase everything that had gone down the week before...[apologies to Across the Aisle for missing their performance at The Knitting Factory the same night...I just didn't have it in me to try to make two different gigs--I owe ya' one, ATA!]

Despite the city's reputation for being a cultural melting pot, this gig was one of the few that I've been to where the Latin ska/rock crowd directly intersected with the mostly Anglo ska scene--the only other time that I recall this happening (and correct me if I'm wrong) was a King Chango-headlined bill at Wetlands in the late 90s and an appearance by Desorden Publico at SOB's around '94 or so. For all the talk and singing--and I believe all of it to be very sincere--about racial unity at so many of the shows I've seen over the years, the New York Ska Festival audience actually embodied it! The crowd was fully integrated, the vibe was great, everyone had a blast, and bands from both ska scenes now have a slew of new fans they probably wouldn't have had without this show (Kofre, sign me up!). From what I've heard from Bigger Thomas' Marc Wasserman, this bill came to be by accident--but what brilliant one!

We arrived too late to catch Floor Kiss and Skarroneros--and only heard a bit of Skarioca, which featured an accordianist and a whole gamut of Latin genres (none of which I'm familiar enough with to write with any authority) mixed in with their ska.

Beat Brigade (featuring original members Carmelo DiBartollo on guitar and vocals; Jack Hoppenstand on guitar; Frank Usamanont on bass; Eric Storckman on trombone; and Dave Barry on keys, who joined the band later in its tenure) stormed the stage next and it was like they had been unearthed from a time capsule (or all of us had been somehow transported back in time)--because we were listening to the pure, uncorrupted sound of mid-80s NYC ska and it gave me chills to hear it. Beat Brigade were fantastic.

I didn't get a chance to shoot a video or two of Kofre (who tore the place up with their high-powered ska, mixed with cool Metallica metal riffs, and you can't resist their pure showmanship--several members of the band donned Mexican wrestling masks when performing!) or Hub City Stompers (who delivered an aggressively tight and spirited set, as always!), since I was talking with Drew Stansall, who is currently the saxophonist for The Specials. Drew got his start with the great Laurel Aitken (they both are from Leicester) and I had the great fortune to work with the Godfather of Ska back in my Moon Records days, so we spent a good deal of time sharing our memories of Laurel--and he was kind enough to answer some questions I've had about Prince Buster, with whom he's also toured. Drew is a terrific guy--make sure to buy him a drink if you bump into him at a show!

Bigger Thomas' set was amazing--both Drew and Nik Torp (another cool cat and Jerry's replacement in The Specials) joined the band for covers of "Nite Klub" and "Monkey Man" (in the video I took, that's Carmelo from Beat Brigade who has jumped on stage to skank), and Roy Radics (a fellow UB40 fan) of The Rudie Crew is the man in yellow toasting during BT's own "Can't Remember My Name":

I bumped into Blanquito Man backstage just before King Chango went on (I haven't seen him in about a decade, so it was terrific to catch up a bit!). Here's a short video of him talking with Roger Apollon, Jr. of Bigger Thomas (dig those "Battlestar Galactica" shades, Chango!)...

King Chango hit the stage just a little before 2:00 am--and my ride back uptown was leaving--so I had to cut out way before their set was done, so here is just a little taste of what they delivered...

Here's hoping that promoters will put together more of these Latin/Anglo ska bills--I want to learn and experience more of the Latin ska acts because they're excellent and I'm completely ignorant of this whole scene. And the cross-pollination of the two scenes will no doubt strengthen the overall state of ska music in NYC--a very good thing, indeed.

Sid Reitzfeld's brother Pete was taking pix all night, so if the photos are posted on-line, I'll make sure to put up a link to them.

This show was a lot of fun. I had a great time. The Second Step song was amazing.

Thanks, KJ! Sorry that I missed you (which just goes to show that there were more people at this gig than there usually are at a typical NYC ska show...).

Many thanks for capturing some memorable moments on video! The whole night was an inspiration. Your review was spot on. Thanks!

My pleasure, Marc! It was an incredible night and I'm really happy that I was a part of it.

Bigger Thomas was on fire at the NY Ska Fest!

Hey Steve , Frank from the Brigade.. Thank you so much for filming us and it's great to see you there. Really glad you enjoyed it!! Awesome night!

Incredible week of nostalgia and just plain good times just exactly like it was in the past! Incredible. It had to be the best 2 weeks ever!

See you soon in future shows I hope!

All the best Frank

yeah steve, i saw you on my way out for a smoke but you were in the middle of a conversation and i figured id say hi on my way back, and then never saw you again for the rest of the night haha.

Great read, thanks, Steve! I was bummed I couldn't make it to this one and was curious how it was.

There was far too much going on that night. I bounced between Pilfers/ATA at the Knit and the Royal City Riot/Nix86/Taj Motel Trio show at Bushwick Music Studios that night. Me and the L train got real cozy.

Everything I said about Beat Brigade was true--and you were one cool customer up on stage! I'm really glad that I had the opportunity to catch and videotape your performance. Keep me in the loop about future Beat Brigade gigs! I'll be there.

Yo, quit smoking, dude! It's way too expensive and, of course, bad for you.

I made my way backstage at one point, so that may be where I went...

How did the Pilfers/ATA show go? If I hadn't had such a hellish week, I was going to try to see ATA at The Knit and then come back to Manhattan for the rest of the New York Ska Festival show, but no dice.