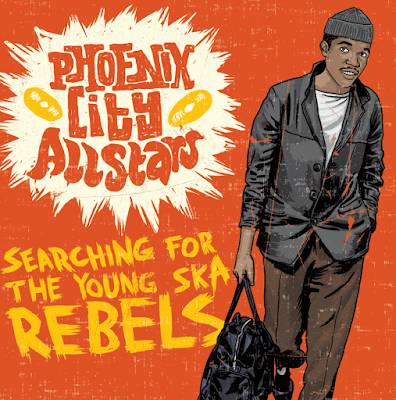 Despite their improbable--but inescapable!--Celtic jug band smash hit "Come On Eileen," Dexys Midnight Runners (named after a form of speed, Dexedrine, which enabled one to dance all night long at Northern Soul parties) were considered an Eighties "one hit wonder" here in the USA (alongside the likes of Kajagoogoo, The Vapors, and many more; I'm sad to say that even Madness fell into this category with "Our House"). Before this hit, I've no doubt that the marketing people at the American wing of Mercury Records had deemed Dexys to be too eclectic and/or "British" for US music consumers' taste (and the marketing execs back then would have been befuddled as to how to pitch white British men playing black American soul music to white US audiences!) and only acquiesced after they saw "Come On Eileen" hit #1 in England in August of 1982. Of course, "Come On Eileen" captured the #1 spot on the Billboard charts in the USA in April of 1983, helped immeasurably by MTVs round-the-clock broadcasting of Dexys' video. (Indeed, many a consistently stunning 1980s UK act like The Jam and Echo and the Bunnymen were shunted off to "left of the dial" media in America, where they were shown the love by college, free form, and "modern rock" radio, as well as odd, late night--and mostly cable--video shows, like "Night Flight"--and madly devoured by anglophile Generation Xers like me; but they were never thought of as being worthy enough to be promoted to the masses). So, while Dexys' "Come On Eileen" will forever be celebrated in the annals of pop music history as a tremendous #1 hit, the rest of Dexys' output will be remain largely unknown by most American pop music fans.

I, too, have to admit that I only became acquainted with more of Dexys' excellent back catalogue about seven years ago (with the 2008 reissue of their debut album, Searching for the Young Soul Rebels) and have just heard some of their more famous songs while doing research for this review! (Back in the day, apart from "Come On Eileen--which was played on commercial pop radio, I never heard any of Dexys' other tracks on WLIR--the New Wave radio station in the NYC area--and none of my friends had any of their albums or talked about them.) Having said that, I'm now a much bigger fan of Dexys Midnight Runners and certainly understand Phoenix City All-stars' smart choice to focus on Dexys for their third tribute album.

Being Brits, the mighty Phoenix City All-stars (led by Sean Flowerdew of Pama Intl and Lenny Bignell of The Sidewalk Doctors), whose previous--and brilliant--albums paid tribute to the music of 2 Tone (Two Tone Gone Ska) and The Rolling Stones (Skatisfaction) as if approached by The Skatalites circa 1965, are clearly more than familiar with Dexys' body of work, which was extremely popular in England (their debut album was #6 on the UK charts in 1980 and two of its singles, "Geno" and "There, There My Dear," went to #1 and #7 respectively). Upon its arrival, the furious, blue-eyed soul of Dexys Midnight Runners' Searching for the Young Soul Rebels was like nothing else at a time when 2 Tone, New Wave, post-punk, and synth-pop were ascendant (as was Margaret Thatcher and her ilk) and made a huge impact on the UK music scene.

Like Dexys Midnight Runners' Searching for the Young Soul Rebels, the Phoenix City All-stars' Searching for the Young Ska Rebels kicks off with a terrific instrumental version of "Burn It Down"--which, in the original, expressed Kevin Rowland's disgust at people's ignorance of Irish people and their culture/history and, in a very bold, punk rock move, his desire to wipe out/replace all of the fashionable pop music of the time with soul (at the opening of Dexys' version of this song, we hear radio static, then snippets of Deep Purple's "Smoke on the Water," The Sex Pistols' "Holidays in the Sun," and The Specials' "Rat Race" as the dial is turned from station to station, before Rowland shouts out, "For God's sake, burn it down!"; Jerry Dammers had offered Dexys a deal with 2 Tone, which Rowland declined, so the "Rat Race" reference is quite the cheeky, public slap in the face in response to Dammers' extended hand...).

Dexys' fantastic, but awkwardly herky-jerky, '"Geno" (a tribute to American soul singer Geno Washington, who, with his Ram Jam Band, was massively popular in the UK during the 1960s--particularly with the mods), is smoothed out and transformed into a great, brisk rocksteady instrumental cut by the Phoenix City All-stars. While the Northern Soul stomper "Seven Days Too Long" (originally recorded by Chuck Wood) was given an almost manic reading by Dexy's (though it captured the singer's desperation quite well), the Phoenix City All-stars' buoyant ska version, with terrific vocals by Cara-Jane Murphy, is a much more confident and relaxed affair. And I love the church organ-led, dub interpretation of the mournful "I Couldn't Help It If I Tried."

Perhaps my favorite song on this album is PCAS' phenomenal, swinging ska cover of "There, There, My Dear," one of Dexy's greatest tracks (and Rowland's blistering attack on what he saw as the phony, clueless, and duplicitous music industry). The commanding, unison horn line gets me every time--it's such a catchy riff (a big shout out here to PCAS' Ali Thomas on alto sax, Jason Cole on tenor sax, and Nick Richards on t-bone, as well as Malcolm Goldmaster on bass and Terry Davey behind the drum kit)! The country-folk-ish "Because of You" was the last single to hit the charts (#13 in 1986), just before Dexys disbanded (and was used as the theme song for the BBC housepainter sitcom "Brush Strokes"). Murphy returns for vocal duties here and the Phoenix City All-stars turn this track into a sweet, Trojans-like vintage ska tune.

Only two songs from 1982's Too-Rye-Ay appear here, Van Morrison's (amazing) "Jackie Wilson Said (I'm in Heaven When You Smile)" and "Come On Eileen" (though there certainly are lots of other good ones to choose from!). The tenor sax takes on the vocal duties for this breezy ska rendition of "Jackie Wilson Said," with fantastic results. And while you'd have every expectation that "Come On Eileen" would include vocals, the Phoenix City All-stars opt to deliver a mellower, Jackie Mittoo-inspired keyboard-driven dub instead, which was a clever and unexpected way to go. (The CD version of Searching for the Young Soul Rebels includes two bonus tracks: an excellent non-vocal version of "Because of You" with the organ upfront and the instrumental version of "Seven Days.")

Lately, my 13 year-old daughter has been completely obsessed with "Come On Eileen," as she was re-introduced to it via the "Perks of a Wallflower" movie soundtrack. I just suggested that she give Dexys' "Jackie Wilson Said" a listen, as I'm trying to do my part to make sure that Dexys Midnight Runners is known for more than one fantastic hit. The Phoenix City All-stars' stellar Searching for the Young Ska Rebels will certainly do a great job of introducing the uninitiated (and most likely American) ska fan to a wider swath of Dexys' music--and those already in the know will love these songs even more in their ska versions!

May I suggest that the Phoenix City All-stars take on The Kinks with their next album?

Great review! You write well. And your suggestion that they take on The Kinks for their next album is a blimmin' good suggestion!