Duff Guide to Ska Fast Takes: The Red Stripes "In the Ska East" 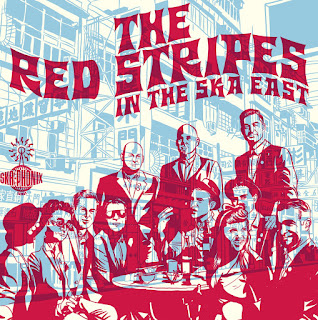 Made up of British, Canadian, and Aussie ex-pats residing in Hong Kong, The Red Stripes' sound is similar to many bands in the late 80s and early 90s who were heavily influenced by 2 Tone, but shed that scene's rougher edges in favor of the traditional jazzy/big band ska of The Skatalites and their contemporaries (think The Scofflaws, The Busters, Potato 5). Produced by Sean "Cavo" Dinsmore (of the Skaboom and Thrill Me Up era Toasters, who also contributes some vocal effects on one track) and featuring Neville and Christine Staple on "Hong Kong Special," In the Ska East offers a mix of fine instrumentals ("Hong Kong Dub," "Theme from 'Rocky,'" and "Rude Rude Rude") and catchy originals with male and female vocals (and lovely harmonizing) by Fred Croft and Sarah Watson ("Julia Posh," "Let Me Tell Ya," and "OK La"). Based on this album, The Red Stripes seem like they'd be a fantastic night out.

(Speaking of connections to The Toasters, The Red Stripes' drummer's name is Matt Davis--can't possibly be that one, right?)

Email ThisBlogThis!Share to TwitterShare to FacebookShare to Pinterest
Labels: Duff Review, Neville Staple, Potato 5, Sean "Cavo" Dinsmore, The Busters, The Red Stripes, The Scofflaws, The Skatalites, The Specials, The Toasters