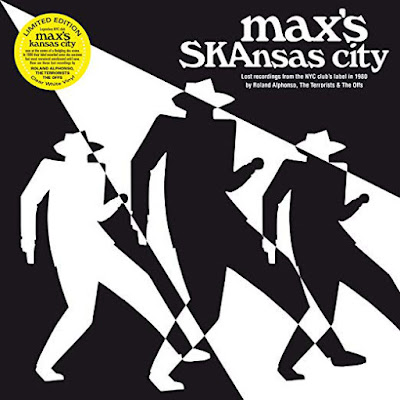 Like CBGBs, Max's Kansas City--which was located at Park Avenue South between 17th and 18th Streets in Manhattan--was one of the key NYC venues that lent crucial support to the nascent mid-to-late '70s punk scene that spawned The Ramones, Talking Heads, Blondie, the Heartbreakers, Television, the Patti Smith Group, Suicide, and many more. From the mid-'60s through the early '70s, Max's had been the hip nightspot for artists (Robert Rauschenberg, Larry Rivers, Roy Lichtenstein, Dan Flavin, Richard Serra, Robert Mapplethorpe, and many more), writers (William S. Burroughs, Allen Ginsberg, Patti Smith, Germaine Greer, etc.), Andy Warhol and anyone in his orbit (including The Velvet Underground), and musicians who liked to hang out and perform there--particularly those from the glam rock scene (Marc Bolan, David Bowie, Iggy Pop, Lou Reed, the New York Dolls, Wayne County, and others). Notably, Bob Marley and the Wailers opened for Bruce Springsteen in 1973! However, by the end of 1974, the club had lost its cachet and closed. A renovated Max's Kansas City re-opened in 1975, with Peter Crowley, who had been poached from CBs, hired to book acts. Crowley continued to showcase the aforementioned punk bands that he featured at Hilly's club (Ramones, Talking Heads, Blondie, et al), as well as other acts like The B-52s, Devo, The Damned, The Runaways, Misfits, Cramps, even Sid Vicious, before it all ended badly for him and Nancy.

According to the terrific liner notes to Max's SKAnsas City by Marc Wasserman (Marco on the Bass blog, Ska Boom: An Oral History of the Birth of American Ska and Reggae), Crowley became a huge reggae fan after seeing the movie The Harder They Come and started booking a regular Sunday reggae night that attracted a solid following of mostly new wave fans. In 1978, he encountered The Terrorists, a ska/reggae band comprised of white, suburban kids from New Jersey who so impressed Crowley that they become a mainstay at Max's. Dro, The Terrorists' drummer, happened to be friends with Roland Alphonso's son Noel and met The Skatalite during one of Noel's band's rehearsals. Alphonso had suffered a stroke a few years previously, so hadn't been playing his sax, but later on Dro caught a recovered Alphonso performing onstage with his son's band Jah Malla (and no one in the crowd recognized who he was except for Dro) and asked him if he'd like to play with The Terrorists at Max's Kansas City.

By 1980, The Offs, who performed an almost unclassifiable mix of punk, ska/reggae, and no wave jazz and had released two singles in 1978, had begun splitting their time between their home-base of San Francisco and Soho in Manhattan. Of course, they performed at Max's Kansas City (Crowley was friends with The Offs' guitarist) and were invited by Crowley to record four tracks--two for a Max's Kansas City single and the others to be released by the band.

Later that year, Max's Kansas City Records released The Offs' "You Fascinate Me" b/w "My World" and Terrorists' "Riis Park" b/w "Justice" singles, but the label soon goes under--leaving the Alphonso and other Terrorist tracks on the shelf, unreleased. (The Terrorists go on to release a terrific 12" single in 1981 with Lee "Scratch" Perry: "Love Is Better Now" b/w "Guerrilla Priest"; and by 1983, The Offs have recorded their extraordinary debut album First Record, which is released the following year--read The Duff Guide to Ska review of it here).

Max's SKAnsas City collects all of the Roland Alphonso, Terrorist, and Offs recordings for the label (some never before released, like all of The Terrorists' covers, The Offs' "Easier Said Than Done," and a few of the Roland Alphonso tracks--several other Alphonso tracks here were also released on ROIR's Terrorist compilation Forces 1977-1982 in 2001). But it also provides the listener with a fascinating glimpse into the mini-ska/reggae scene in New York City that had developed organically with the same 1960s ska influences and roughly along the same time line as those in London, Coventry, and Birmingham (though those 2 Tone bands would have a much more significant impact).

The Alphonso/Terrorist tracks on Max's SKAnsas City are particularly striking--and one could credibly claim that they're amongst some of the best recordings of these tunes. Alphonso is in really fine form here, playing spritely riffs as he improvises on classic Skatalites tracks like "Sax Skandal" (AKA "Christine Keeler"), "Tear Up," "Musical Resurrection," and "Four Corners." Without any competing horns, it's a wonderful showcase of his considerable talents. The Terrorists' masterful backing is tight and lively (the rhythm section is amazing); they had the chops and then some! For someone who typically worked with punk bands, Crowley's production gives these recordings a wonderful warmth and immediacy; had these recordings not been shelved, I suspect he would have been much sought out by other ska and reggae acts.

The Terrorists on their own (with punk singer John Collins on vocals) preferred their recordings to a bit rougher and their ska-reggae sound/attitude adjusted slightly for the punk/new wave times. This comp features their great original track "Riis Park" (about the infamous and unsanctioned nude beach there) and excellent versions of The Tennors' "Pressure and Slide," Delroy Wilson's "I Want Justice," Hopeton Lewis' "Take It Easy," a haunting take of Junior Byles' "Fade Away, " as well as some ska covers of rhythm and blues hits, like Allen Toussaint's "Working in a Coalmine," and Roy Head's "Treat Her Right."

Of all the bands on the comp, The Offs receive relative short shrift here, due to how this all played out back in 1980. This early ska/funk version of "You Fascinate Me" (about watching young street hustlers ply their trade) pales in contrast with the second take of this cut on First Record, which is more ragged and demented and just plain better. "My World" is a solid punky ska cut, though the demo-sounding "Easier Said Than Done" would have been amazing in a more finished form. (According to the liner notes, Crowley and The Offs were pilloried by punks for making the band sound over-produced on their Max's Kansas City single--though Crowley said he faithfully captured the sound of the band as they were on stage.)

By the early 1980s, both The Offs and Terrorists had disbanded (The Offs' singer Don Vinyl overdosed in 1983), though Roland Alphonso would reunite occasionally with The Skatalites for the first half of the 1980s (like for the 1983 Reggae Sunsplash). A second generation of Big Apple ska bands would soon crop up--though these were primarily influenced by 2 Tone, not by what had come before on the NYC scene. UK ex-pat Rob "Bucket" Hingley formed The Toasters in 1981 and in the following years the NYC public high schools yielded a slew of dynamic new ska bands, including Beat Brigade, Urban Blight, the Second Step, City Beat, the A-Kings, and others. A more permanent reunion for Alphonso and his fellow Skatalites would come after Cedric "King" Bravo (another JA ex-pat, sometime record producer, Canal Street ska and reggae record vendor--where he first encounters The Toasters' Unity 2--and Skatalites associate) brought The Skatalites' Lloyd Knibb and Ken Stewart to see The Toasters play at CBGBs in 1986, which convinced them that it was viable to begin touring and recording again (and The Skatalites, of course, went on to have great success on the road and in the studio throughout the 1990s and 2000s).

Anyone interested in the origins and development of the U.S. ska scene will find Max's SKAnsas City to be an invaluable and essential part of their record collection.