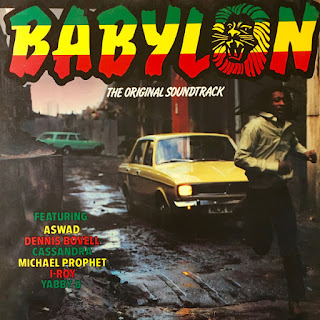 Even though I saw "Babylon" weeks ago at its ridiculously long-delayed US premiere at BAM (the film was originally released in the UK in 1980, but not shown in America, presumably because its black protagonists sometimes respond to racial oppression/abuse from white people/institutions with violence), images and scenes from the movie continue to haunt me. While its plot is fairly straightforward ("Babylon" follows a group of working class black friends/musicians who run a sound system and are subjected to racist abuse from just about everyone--bosses, neighbors, and the police), it has a stark realism to it--between being shot on location in run-down Brixton (often in difficult-to-film low-lighting conditions, but somehow always maintaining visual crispness and its warm and vivid color tones); the depiction of the ubiquitous societal/institutional racism freely expressed toward black Britons circa '79/'80; great, funny dialogue (with lots of Jamaican slang--which was subtitled); and the spot-on, relaxed performances by all involved, it could almost be a documentary. And, of course, the film's hard-to-find soundtrack is outstanding (with Yabby U, I-Roy, Cassandra, Aswad, Vin Gordon, Michael Rose, Dennis Bovell, and more; also, the film's protagonist Blue is played by Aswad's Brinsley Forde and a rival sound system DJ is Jah Shaka). Before I caught the film, I tracked down a German copy of Babylon in decent shape that wasn't too costly. Side two, in particular is stellar and happens to contain the two Aswad and three Dennis Bovell cuts. But the official Babylon OST (vinyl LP, Chrysalis Records, 1980) doesn't contain all of Bovell's music for the film. So, in conjunction with the US premiere/release of the movie, Dennis Bovell issued the nine-track digital album Babylon: The Original Score (Old School, 2019) containing the entire score he wrote and recorded for this soundtrack (including six songs that did not appear on the 1980 Chrysalis LP). It goes without saying that all of these tracks are excellent and heard in snippets in the film (Bovell is a master of catchy melody and mixes/shifts between musical genres with ease), but I'm particularly grateful to have the ska cut "Runnin' Away" (featured during the dance scene at Lovers' engagement party in the church hall and sounding like one of the '50s rock/rhythm and blues-influenced tracks Laurel Aitken would have released in the early '60s); the funky, strutting "School Skanking" (check out that harmonica!); and the righteous roots reggae of "Living in Babylon" (a clear-eyed recounting of the brutal challenges of being black and poor in racist Ingland). Needless to say, this album is essential and absolutely deserving of being issued on vinyl someday (please!). 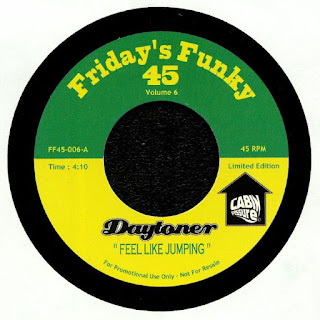 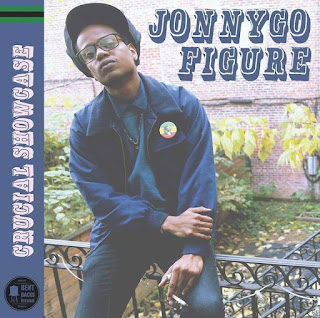 Daytoner's terrific versions of Marcia Griffiths' "Feel Like Jumping" and Phyllis Dillon's "Perfidia," which they've retitled "Perfidious" (7" vinyl single, Friday's Funky 45/Cabin Pressure, 2019); I found a copy at Rock and Soul in Manhattan) inject just the right amount of early '90s hip hop/De La Soul-like beats and samples so as to give these ska and rocksteady classics new life. And they're sure to draw new fans to the dance floor without alienating the ska faithful.

Brooklyn-based reggae singer/DJ JonnyGo Figure (who's also a member of Megative and has collaborated with The Frightnrs and Full Watts Band) has released an excellent EP of early '80s sounding roots reggae and dancehall (that one could imagine being issued on Greensleeves, circa 1982) called Crucial Showcase (12" vinyl/digital, Bent Backs Records, 2019). On the Yellowman-ish "Vinyl Lover," JonnyGo Figure speaks to his real-life obsession with records and how that came to be ("Mi love vinyl and mi play it fe fun/Mi love vinyl and I never have a gun"). The rootsy "Natty Take Over" is about discovering and embracing Rastafarianism ("Mr. Babylon to move over/This a Natty Dreadlocks take over/When I was a boy they used to say I'd amount to nothing/But now I'm a man they're starting to see that I am something/Look out, look out, Natty taking over..."). He's ready to join with his peers to fighting for a more equal and just society in "Revolutionary Youth": "I tell ya, stand up! Stand up!/Strap up on de Armagideon boot/The time now, we have to recruit/Come on, we chant it, chant it/Come on and let we seek de truth/If you ready, let me see you salute/I'm a revolutionist...Time to start a revolution, boy/'Cause that's the only solution, boy." And knowledge of one's own mortality looms large in "Jam It Up"--there's an expiration date on all of us, so it's best to live a righteous life full of joy in His music: "One day I'll die, no matter what me say/You know, say papa Jah, he the only way I say, so/Come on let me play a Jah Jah music/Let me jam it up..." There's much to ponder while grooving to JonnyGo Figure's seriously good music.

Released for Record Store Day 2019, Prince Fatty and Earl 16's "Be Thankful for What You've Got" b/w "Be Thankful Dub" (7" vinyl single, Evergreen Records, 2019) is a cover of William DeVaughn's 1974 smash soul hit, which was also covered by Bunny Clarke in 1974, Winston Curtis in 1984, Massive Attack in 1993, as well as sampled by numerous hip hop artists. The song's brilliant lyrics have been perennially popular for their depiction of aspirational cool in the face of deprivation (and, no doubt, for evoking a particular era--I remember seeing this exact model of Cadillac in the Bronx in the '70s): 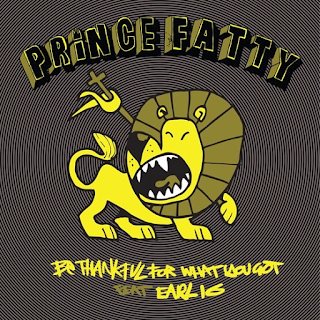 Just be thankful for what you've got
You may not have a great big Cadillac
Diamond in the back, sunroof top
Diggin' the scene
With a gangsta lean
Gangsta whitewalls
TV antennas in the back

This spectacular version features a bright and brisk reggae beat (plus a few laser effects) that contrasts wonderfully with Earl 16's beautiful but bittersweet vocals about proudly hanging tough in tough times. The harmonizing on the chorus is incredible, lightly conveying the sadness/loss in all that could have been if things only worked out another way. Apparently, the reason Prince Fatty and Earl 16 decided to record it was because they discovered it was a favorite of both of theirs--and it shows in this gorgeously constructed track and its fantastic companion dub.