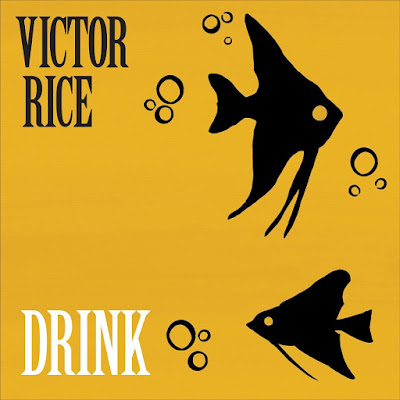 Victor Rice's Drink is the second album in a planned trilogy of what Rice calls his "samba-rocksteady" instrumentals (read The Duff Guide to Ska review of his first LP Smoke). Recorded in Belgium with Nico Leonard (Pyrotechnist, The Moon Invaders, Pum Pum Hotel studio) and New York with Ticklah (Sharon Jones and The Dap-Kings, Antibalas Afrobeat Orchestra, and Easy Star All-Stars) at the controls and members of The Moon Invaders, Tommy Tornado, Mr. T Bone, The Slackers, The Scofflaws, and others performing, Drink is yet another top-notch album from Victor Rice and filled with evocative tracks expressing a gamut of moods. Indeed, as Rice comments in the album's press materials, “Most of these songs were written during a difficult period in my life, and there was a lot of drinking involved, so they were made under the influence of red wine. Once the sequence of songs were finished, it felt like a story arc, from the first glass to the last."

Within this context, one can infer what each song's rhythms and melodies might be meant to express. Drink opens with "La Mura" ("The Wall"), which has a bit of a dramatic spaghetti Western reggae edge to it--we're on a long, never-ending slog and soon hitting our limit--and the horns convey increasing tension as the song unfolds. "Simão" ("Simon") features a series of elaborate rock guitar riffs that seem to be in an increasingly heated conversation with the more restrained horns (but, it turns out, is named after Rice's cat), while the stately and cinematic "The Demander"--which refers to Rice's first car that he sometimes drove "recklessly"--has echoes of Prince Buster's "Gangsters" and "City Riot" (and sounds very much like Prince Busters' All Stars--which, of course, was comprised of many of The Skatalites). Like the meme of the cartoon dog drinking coffee while the room around him is ablaze, "This is Fine" is bright and chipper on the surface, but in denial of something more ominous--and "Bebida" ("Drink") sounds delightfully carefree, like when you have a good buzz going at an outdoor cafe and all your troubles recede from your thoughts. "Arouche" is refined, but busy--and refers to the slightly seedy, downtown São Paulo neighborhood known for its nightlife (where Rice lives). There's a nobleness to "Five," as if someone's valiantly grinding it out each workday until quitting time (so they can finally live at happy hour). "Madrid" has a muted, almost downcast melody, but with a stinging guitar solo (what went down here?). Last call is where we are with the dubby "Time to Go"; things have gotten pretty fuzzy and sloppy, and it's time to pour oneself into a cab.

While one is certainly sad for what Rice went through, his rough patch inspired the creation of some wonderful music. Will Comer round out this trilogy?