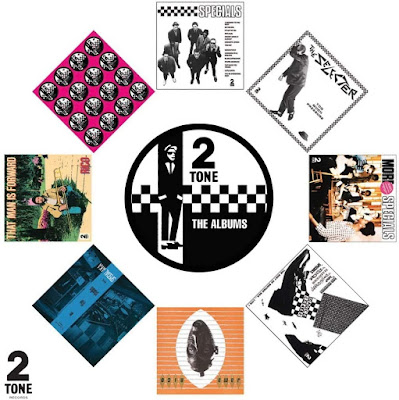 Released as part of the ongoing 40th anniversary celebration of 2 Tone (which has included a box set of 2 Tone vinyl singles), the eight-CD box set 2 Tone: The Albums captures most of the extraordinary music issued by this label over a short number of years--and soundly reminds one why 2 Tone continues to resonate with old fans and new converts to the present day. This box set is comprised of The Specials' The Specials, The Selecter's Too Much Pressure, The Specials' More Specials, Dance Craze, Rico's That Man Is Forward and Jama Rico, This Are Two Tone, and The Special AKA's In the Studio. I've seen and agree with comments from fans lamenting the exclusion of The Selecter's Celebrate the Bullet--even though they had left the label by the time it was recorded, The Selecter were still on Chrysalis, and Celebrate is unquestionably a 2 Tone record in sound and spirit. I also believe The Specials' phenomenal Live at the Moonlight Club--recorded just a few months before they went into the studio with Elvis Costello--should have been included in this collection, as it actually serves as a better debut album than the studio version, and documents the band at its best in performance.

While the majority of these albums have been previously released on CD over the decades, 2 Tone fans will still be enticed to pick up this set, as this edition of Dance Craze restores the Madness tracks that were excised from previous CD reissues over copyright issues, and for the fact that Rico's magnificent Rico Jama has never before been available on CD outside of Japan (and import, vinyl copies of both of Rico's 2 Tone albums were hard to find in the USA even when they were first released!). Jerry Dammers led the art direction for the packaging, which is sharp and in line with 2 Tone's established retro aesthetics. Each album is housed in a mini-LP sleeve with its original artwork, and the inner sleeves feature the albums' original paper labels and other graphic elements. Dance Craze and This Are Two Tone were remastered for this release (both are also being issued in half-speed master editions for Record Store Day 2020; neither has been repressed on vinyl since the 1980s; Chrysalis--please give Rico's albums the same vinyl reissue treatment!), and the other albums feature new or 2015 remastered versions. And the list price is a very reasonable £35.99 (around $38), though you'll have to find an import copy if you're not in the UK.

Lastly, I'd add that the tremendously good and insightful liner notes by Peter Walsh and Jason Weir of 2-Tone.info really cap an already fantastic package. Even though I'm fairly knowledgeable about all things 2 Tone, I learned many new details, such as what the "Ultra Stereo" listed on the back cover of More Specials referred to ("instrumental tracks were pushed hard left and right in the stereo field so listeners could listen to two completely different mono albums" by adjusting the balance knobs on their stereo receivers; I tried it while listening to "Man at C and A" and it works!); the fact that the E in More Specials was sometimes deliberately scored in ads or obscured by a what appears to be a hype sticker ("includes the single Stereotype/International Jet Set") on some album covers, so that it ironically read MOR, as in "middle of the road," which the album certainly was not; and that Rico's cut "That Man is Forward" was included in the soundtrack for Barbet Schroeder's great 1987 Charles Bukowski bio pic Barfly with Mickey Rourke and Faye Dunaway.

Obviously, 2 Tone: The Albums is the best introduction to these bands that a newbie could ask for. But long-time fans, whose old, well-worn and merely adequately mastered CDs could use updating, should definitely consider springing for this terrific box set.

Shameless plug: You can find my reviews of reissues of many of these 2 Tone albums, as well as write-ups of all of the 2 Tone bands' more recent records, gigs, books, and movies in my new book, The Duff Guide to 2 Tone, which is available worldwide through Amazon, and Copasetic Mail-order in Germany.