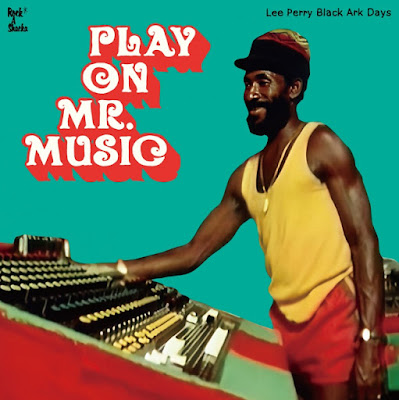 Lee Perry's Black Ark Days: Play On Mr. Music is a stellar collection of mid-1970s rarities produced by Perry at his legendary Black Ark studio (where he, of course, created some of his most brilliant productions, including The Congos' masterpiece, Heart of the Congos). Play on Mr. Music is most notable for its title track, the recording of which was captured in Jeremy Marre's excellent 1977 documentary Beats of the Heart: Roots, Rock, Reggae (he also directed the superb Reggae Brittania, broadcast on the BBC in 2011). The song "Play On Mr. Music" features the stellar core of acts Perry was working with at the time--The Heptones, The Congos, and Junior Murvin--credited as The Upsetter Review. Apparently, this cut was quickly written just before Marre's cameras showed up, which makes it all the more extraordinary (and may explain why it sounds like it could have been off Heart of the Congos--they were likely recording it around this period). Other highlights on an album full of them are The Silvertones' alternate take of "Rejoice Jah Jah Children (Dub Plate Mix)," Jimmy Riley's soulful "Give Me A Love," Perry's own fantastic offbeat showpiece "Soul Fire" (which was the lead track on Perry's 1978 album Roast Fish, Collie Weed, and Corn Bread), Sam Carty's otherworldly sounding "Milte Hi Akhen aka Bird in Hand (Full Vocal Version)" (which is a cover of a Hindi movie theme; a dub version of this track appears on Perry's Return of the Super Ape), Mystic I's incredible and hard to find adaptation of the traditional gospel hymn "One More River to Cross," and Junior Murvin's wonderful take on Curtis Mayfield's "People Get Ready" (and there are dubs of many of these tracks by The Upsetters). Play On Mr. Music also includes liner notes by reggae expert David Katz that provide helpful context while you listen.

If you've never seen Marre's Beats of the Heart: Roots, Rock, Reggae, you should carve out the hour in your schedule to watch it, as it's an extraordinary document of the JA roots reggae scene in 1976. There are interviews and/or performances by Jimmy Cliff, Lee Perry, The Congos, The Heptones, and Junior Murvin, Joe Higgs, The Gladiators, The Mighty Diamonds, Bob Marley, Ras Michael, The Abbyssians, U Brown, U Roy, Inner Circle--who were wildly popular in JA at the time--and others. Jack Ruby (who produced Burning Spear's essential Marcus Garvey and Garvey's Ghost, and was father of The Toasters' deejay/singer Jack Ruby, Jr.) is captured auditioning aspiring singers, and we see singles being pressed in Joe Gibb's pressing plant. Rastafarianism is explained in a fairly clear-eyed manner. The pernicious legacy of British colonialism is addressed (and to some degree US political and business interests)--and lots of shots of people living in extreme poverty in Trenchtown's shantytowns are shown as proof--and Prime Minister Michael Manley comments on the intertwined relationship between reggae and Jamaican politics (Perry states, "Rhythm from the ghetto, lyrics from the streets"), as well as his county's embrace of democratic socialism as a means to alleviate the dire economic inequality experienced by most Jamaicans. The only odd bit is when the narrator suggests that rocksteady preceded ska. Otherwise, it doesn't get much better than this.