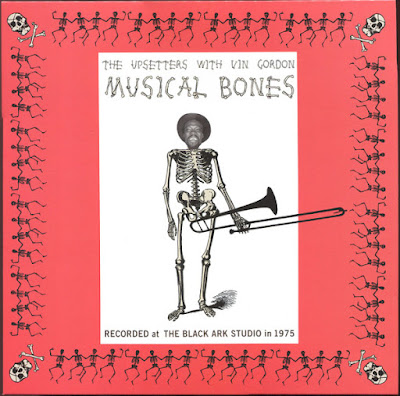 (Review by Steve Shafer)
Musical Bones is part of a trilogy of instrumental albums--along with Kung Fu Meets the Dragon and Return of the Wax--that Lee "Scratch" Perry produced in 1974 at his own legendary Black Ark studio, which he had just completed building in the backyard of his home in the Washington Gardens section of Kingston in late 1973. These three albums were first released in 1975 in the UK on Dip Records (a London-based label operated by JA ex-pat Dennis Harris) in extremely limited numbers--only 300 of each LP were pressed (Musical Bones and Return of the Wax on white labels with "Upsetters" stamped on them) and, of course, are now almost impossible to find. While the other two albums in this trilogy were Bruce Lee/Kung Fu movie-inspired tracks (Kung Fu Meets the Dragon, in particular, is a great set of dubby reggae instrumentals featuring Augustus Pablo's melodica, and all sorts of odd and wonderful sound effects), Musical Bones differs in that it's almost single-mindedly focused on Vin Gordon's extraordinary and emotive trombone playing throughout, with The Upsetters providing the rock solid reggae foundation that allowed Gordon to strut his jazzy, improvisatory stuff on. Perry played it very straight as producer here--his wild and unorthodox production tendencies are fully in check; this is Gordon's showcase. Several tracks are immediately recognizable: "Coco-Macca" is a loose cover of Don Drummond's "Green Island"; "Fly Away" is a version of Sound Dimension's evergreen "Real Rock" riddim (Gordon, of course, played on the original); and "Raw-Chaw" is a medley of sorts of The Skatalites "Addis Ababa" and Don Drummond's "Eastern Standard Time." Others cuts are quite good Perry originals, including "Labrish" (which he had also used for a single with Bunny "Striker" Lee) and the lovely "5 Cardiff Crescent" (Perry's address in Kingston), which sports some fantastic piano playing by Winston Wright and is the one track on the album where the horn line is fully incorporated into the song (as opposed to riffing over the riddim). Despite having performed on an amazingly large number of essential ska and reggae recordings, Vin Gordon's own studio output is relatively limited, so it's terrific and fitting to have Musical Bones and his official 1980 debut Way Over Yonder (which I reviewed) back in print for fans to appreciate and devour after all of these years.
Posted by Steve from Moon at 4:36 PM

For those unaware, the easiest way to get this album is on he Trojan CD “Dubstrumentals” set from 2005 (which also includes “Kung Fu” and “Return of wax”)