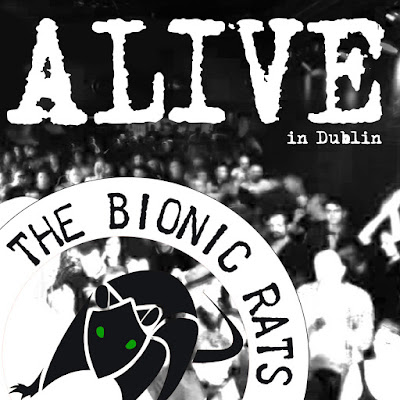 (Review by Steve Shafer)
For music fans, there's nothing as satisfying as a fantastic live recording of one of your favorite bands in top form, is there? Alive in Dublin, the outstanding new album from The Bionic Rats recorded at the end of last summer at the Lost Lane before everything went pear-shaped, certainly fits this bill--and serves as both a Bionic Rats greatest hits collection and celebration of the 10 year anniversary of the release of their debut album in 2009. I've long been drawn to The Bionic Rats' catchy, sing-along 2 Tone-influenced ska songs, as they're oftentimes quite funny, cheeky, and downright rude, but also genuine, insightful, honest to a fault, and coming from folks with their hearts and minds in all the right places (they're fiercely anti-racist--see "Half a Mind" and "Don't Be Giving It All That.").
In this generous set, The Bionic Rats play songs about lurching from personal crisis to personal crisis ("Another Fine Mess"); waiting for a girl who's never going to call ("Bored to Tears": "Sitting at home pulling the balls off me jumper"); "buying local"/Irish pride ("Brand New Geansai"--the Irish word for jumper/sweater); how capitalism grinds us up while making someone else rich ("I'm Doing Good"); challenging Christians to actually do what Jesus is said to have preached ("Seen and Not Heard": "You know actions/Speak louder than words...I feel Christians/Should be seen and not heard"); unapologetically loving/playing reggae ("Red, Gold, and Green": "Reggae is the pallet that I paint with/Red, gold, and green/Talking about the things I bear witness to/On and off the Liffey’s quays/I’m not Jamaican/Dublin born and bred/I don’t wanna be a natty dread/I’m not a Rastaman and I have no God/I am, what I am, I am"); telling all the haters trying to bring you down to sod-off ("Twisted Little Fuckers": "You's can all see them/I am not alone/They're the undead/I feel sorry for their children"); loving the vinyl single life ("Hooked on 45s"); being on the hunt for ecstasy ("Annie Oakes"); and more--all concerned with trying to get by in life, not being evil, and having a bit of fun while doing so. With 16 tracks selected from all four of The 'Rats' studio albums (including T.B.R., which I reviewed a few years ago), Alive in Dublin is a stellar overview of the band for newbies, and long-time followers are sure to have some of their most beloved cuts included here. For those us of us not yet lucky enough to be able to catch The Bionic Rats live in person, this should tide us over until that great day finally arrives.

For those interested, Bionic Rats' singer/guitarist Del Bionic does a live streaming set via FB every Sunday at 9:00 pm (UTC).
Posted by Steve from Moon at 6:23 PM