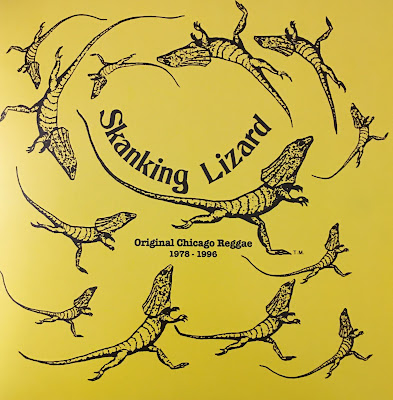 In the fall of 1985, I was a freshman at a small, liberal arts college about an hour south of Cleveland, in a town surrounded by cornfields in all directions. I ended up there because just about everyone I was related to on both sides of my family had attended that school (some also went on to teach there) and I was at a point in my life when I had no idea what I wanted to do. So, it was simply the path of least resistance. Fortunately, I became good friends with some kids from Rochester and Cleveland who were into many of the same new wave, punk, and post punk bands as I was, like The Cure, Yaz, Cocteau Twins, Simple Minds (Sons and Fascination/Sister Feelings Call through Sparkle in the Rain), Killing Joke, Roxy Music, Bauhaus, Husker Dü, and Black Flag--and everyone seemed to have a copy of Bob Marley's Legend.

One warm Saturday in October, there was a music festival in a field just outside of town that was sponsored by one of the hippie pseudo-frat/off-campus houses as part of their pledge week. Since one of our friends was pledging, a bunch of us tagged along and the beer truck kept us entertained while we endured a series of endlessly noodly Grateful Dead-inspired bands (one of my friends decided to trip on 'shrooms and when I asked him how he was doing, he replied that everything was "spherical"; I mention this, as there's more on mushrooms below). Then, seemingly out of nowhere--and we really were in the middle of nowhere--a reggae band from Cleveland called First Light started playing. And they were really good, performing a mix of their own originals and covers. I was so thrilled by their set that I practically bum rushed the stage at the end of their set to tell them how much I enjoyed their show and to buy a shirt. They told me about their new 12" EP Musical Uprising, which I ended up buying on a trip up to Coventry Road in Cleveland Heights (their abridged version of NYC's West Village)--I still have it (check out "Musical Uprising" and "Holdback Syndrome"/"Movin' On"). And my friend C.H.U.D. (a cruel nickname given to him by some football players in our dorm that he wore like a badge of honor) and I wanted more, so we caught First Light again at Peabody's Down Under in The Flats in Cleveland later that semester.

In high school, I had seen Peter Tosh, Black Uhuru, and UB40 (multiple times) at the Pier 84 concerts in Manhattan on the Hudson River. But I was hearing fantastic, original, American reggae in the middle of a cornfield in conservative, white bread (and very white) OHIO. My belabored point here is that the first generation of American reggae bands sometimes sprouted in unlikely places far from the Coasts, like Cleveland, Chicago, and Kansas City. If you were paying attention, you could find them (just like the first US ska bands that cropped up in the wake of 2 Tone). Inspired by The Harder They Come film and soundtrack, Bob Marley's Catch a Fire and subsequent LPs and US tours (First Light's Carlos Jones saw Marley in Cleveland in '78), United Artist Records' Anthology of Reggae Collectors Series, and whatever Trojan and Virgin Front Line UK imports they could get their hands on, a slew of American reggae acts formed in the mid-to-late '70s, including Berkeley's The Shakers, Kansas City's Blue Riddim Band, NYC's Terrorists, and Chicago's Skanking Lizard.

As part of their series of releases devoted to Chicago-area ska and reggae pioneers (Heavy Manners, Rude Guest), Jump Up Records has issued a fine new compilation of rare and unreleased recordings from Chicago's first live reggae act Skanking Lizard--who opened for Toots and the Maytals, Mighty Diamonds, Steel Pulse, and The B-52's back in the day--titled Original Chicago Reggae, 1978-1996. Up until now, Skanking Lizard's sole release was their excellent 1983 "Jesse James" b/w "Mushroom" single on their own Reptile Records (which made it into the top 40 in JA). Side A is not a Laurel Aitken cover, but the band's original tune on the same topic, while the flip is a great version of Johnny Osbourne's slightly odd anti-psychedelics/pro-ganja cut ("The only thing the dawtas asking for all night/Was a stalk of mushroom--what is that, my gosh/Don’t want no mushroom to go to my head/Gimme the good sinsemilla instead/Don’t pee in my garden/'Cause mushroom will grow/Don’t pee in my garden/I don’t want your mushroom to grow/Sensimilla--that's I want to grow!"). The other two tracks to see light of day on the comp are from singer Alan "Blood" Lery's 1984 solo EP Heart Full of Soul (which hit it big on the Canadian charts): Lery's great original "It Happened" and a terrific cover of The Yardbirds' "Heart Full of Soul." Of note, the instrumental tracks were produced by Jimmy Becker (of Blue Riddim Band, who had been in the earliest version of Skanking Lizard) and recorded in JA at Channel One with local musicians including Ansell Collins, Carlton "Santa" Davis, Noel "Scully" Sims, as well as Blue Riddim Band's guitarist Howard Yukon--and Lery added his vocals in a studio in Chicago.

The unreleased Skanking Lizard tracks on the album were recorded at various points throughout the '80s and include good covers of Mighty Diamonds' "I Don't Mind" and Keith and Tex's perennial "Tonight"; the interesting Lery-penned cuts "Strange Cargo" (I think it's about coming across a drug smuggler's errant load, but it feels like Cold War dread: "A strange cargo fell out of the sky last night/Don't worry child, no reason for you to cry") and "Wear a Smile" (which encourages the listener to enjoy life while you can, as tears won't get you into heaven); and fun versions of Beat and Selecter classics ("Tears of a Clown" and "Too Much Pressure").

Skanking Lizard's Original Chicago Reggae, 1978-1996 will be prized by fans who caught the band in the '70s and '80s--and is essential for anyone interested in nascent days of the American reggae scene.