Duff Review: RSD Drop #1/One of Two Releases from Jump Up Records: The Skatalites "Bashaka" 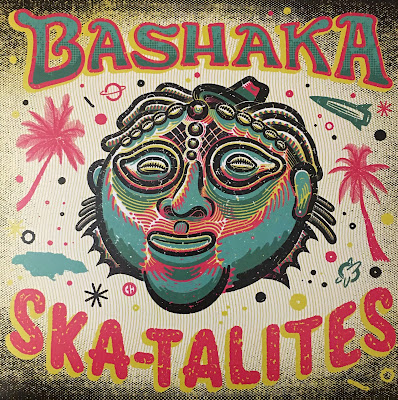 Unless you were paying extremely close attention, it's likely that you had no idea that The Skatalites' Bashaka even existed until Jump Up Records announced this reissue (full disclosure: I was among the clueless). But don't worry too much about your ska street cred. Bashaka was issued in 2000, right after the bottom fell out of ska in the USA, on a small indie label in Florida that went under soon after its release (trainspotters will want to know that it was also licensed to Celluloid in France with an unintentional Kiss-referencing cover). Thankfully, Jump Up's Chuck Wren was paying attention and as part of his Skatalites reissue series (he's released 1993's Skavoovee, 1994's Hi-Bop Ska, 1996's Greetings from Skamania, and 2016's Platinum Ska) is rescuing this terrific "lost" album from oblivion, which in 2000 was their first new studio album since 1997's Ball of Fire. Warmly and wonderfully produced by the now late Ralston "Stamma" Haughton (a Jamaican-born bass player/singer who worked with Peter Tosh, Bob Marley, Ken Boothe, and others; fronted his own band Stamma & The Clubbites; and originally released this album on his own Marston Recording Corporation imprint), Bashaka (Clear yellow vinyl LP, Jump Up Records, 2021, artwork by CHema Skandal) features non-stop, top-notch original cuts (every player and singer contributes at least one song--though Stamma's two songs from the CD were left off, likely due to LP space), original Skatalites Lester Sterling, Lloyd Brevett, Lloyd Knibb, Cedric (Im) Brooks, and Doreen Shaffer, plus guest vocalist (and Stamma friend) Ken Boothe, and newer (and great!) Skatalites Devon James, Ken Stewart, Will Clarke, and Mark Berney.

Some particularly outstanding tracks include the Middle Eastern-sounding "Ska of Iran" (renamed from the CD, where the song was titled "Skaravan"; anyone old enough to know this is a pun on the infamous CIA-stooge/dictator Shah of Iran whose ouster led to the Iranian Hostage Crisis?); the wistful tribute of "Roland Ride Along" (Alphonso passed away in 1998); and the cheery "Wild Honey" (which in Biblical times was a sign of luxury or abundance). Shaffer's song "Reach for the Sky" is not about a stick-up artist, but urges everyone to do their best (and she also wrote "Oh Baby"); "Milk Lane Shuffle" features that classic '60s Skatalites sound, which there can't be enough of in this world; and, as one might guess, "What a Day" is positively exuberant. The Ken Boothe/Dobby Dobson-penned "I Never Knew (What a Queen Was Like)" sung by Boothe is fantastic ("I was living like a pauper/With just bread and water/And then you came into my life/And all is do is prosper"), and "Hail Tommy McCook" with Brooks' spoken word tribute is heartfelt and lovely: "Hear, Tommy McCook. We salute you. You are one of the great musicians of Jamaica. Your contribution to our music will be remembered and praised from generation to generation" (McCook also died in 1998, less than two years prior to this album's release; he had stopped performing with the band in '95, due to poor health).

Bashaka is an Arabic name meaning nimble, which is a fantastically appropriate title for this album. Here, The Skatalites sound ever so relaxed, supremely confident in their groove, and make the hard business of making quality music seem simple and effortless. Don't miss out on this essential entry in The Skatalites' catalogue!
+ + + +

I’ve been singing the praises of Bashaka for years, it is a shame the band never saw money from this great release. For a long time (probably even now) you could pick up new copies of this CD for a couple dollars, I think Ernie B ended up with nearly the entire stock and it was always on his discount list.

Interesting! Thanks for your comment. I may want to pick up the CD from Ernie B's to hear Stamma's two tracks...