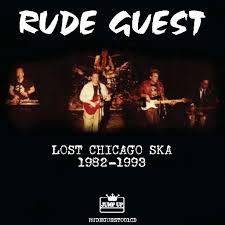 Rude Guest Lost Chicago Ska 1982-1993 (CD, cassette, Jump Up Records, 2016; LP with remixes/bonus tracks forthcoming, 2017): While the history of the first wave of American ska bands to crop up in the wake of 2 Tone is still largely unwritten and forgotten (apart from the efforts of bands like The Toasters, Bim Skala Bim, Fishbone, and The Untouchables), every now and then another vital piece of this story comes to light. Thanks to the determination of ska obsessive and Jump Up Records label head Chuck Wren, Chi-town ska pioneers Rude Guest are finally getting their due. Founded in 1982 by brothers Kurt and Paul Schroeder (vocalist and drummer, respectively) and directly influenced by 2 Tone--while backpacking in Europe after college, Paul caught Madness and UB40 live and sent tapes of 2 Tone acts back to Kurt in the USA--Rude Guest released four DIY cassettes of all-original material (recorded surreptitiously and on the cheap after-hours through a friend at a Chicago recording studio); gigged extensively at colleges and clubs throughout the Midwest; opened for Fishbone, the Crazy 8s, Yellowman, and Naked Raygun; and appeared at the first Midwest Ska Fest in Milwaukee in 1991. Despite all of their obvious talent and long hours on the road and in the studio, Rude Guest never was able to snag a record deal (from a recent feature on the band in the Chicago Reader: "The rejection letters weren't always so bad, though. "I think the best one—I'm trying to think of who it was—they say, 'We really like you guys, but we just signed UB40,'" Paul recalls. "We love UB40. We're like, 'OK, that's not such a bad slam.'") and Kurt tragically died of cancer at age 40 in 1996, effectively ending the band just as the US ska scene was exploding.

Like many of the early 80s American ska groups, Rude Guest played tightly-wound, twitchy New Wave-y ska and reggae (synths abound!), but what makes everything transcend those times is the great strength of their songs and performances (earworms abound!). A brilliant example/starting place is the triumphant "Still I'm Happy" from their 1985 cassette, a bass-driven ska track (with killer sax and guitar solos) that shifts between minor and major keys to reflect the conflicting emotions of a break-up and the realization that the singer will be okay no matter what: "Too late, too late, too late/I'm sorry, she said and then she walked away...I can't go/I'm at the end of my rope/She said no/I wonder is there any hope...I don't know just what I'll do or where I'll be/But still I'm happy!" But there's a treasure-trove of other stellar tunes to check out, including the dubby reggae tearing down of someone's facade in "There You Go" ("Look at the way you're parading/Look at the way you think you ought to be/Look at the way you're masquerading/Look at the way/I can always read between the lines...I hope your head don't go/Where the sun don't shine/I hope your savvy don't go/'Cause you can't have mine"); a longing to escape civil unrest/war in "Revolutionary Night"; "Please, Please, Please," which may be one of the catchiest come ons/declarations of love ever set to a ska beat; the self-doubting, I'm-not-worthiness expressed in a "Girl Like You" ("What would I do/With a girl like you?") that first appears on the 1983 tape and is more than worthy of being reprised and polished up for the 1985 cassette; and the ominous "We Can't Cry," which laments the fact that humanity is headed toward self-destruction via global environmental disaster, famine, or world war: "We won't know/Until it's too late/What to do/To save ourselves."

After listening to Lost Chicago Ska, it's quite evident that had the right break come their way, Rude Guest could have hit it big--really big. But at least their place in the story of American ska is now secure and Rude Guest's amazing songs are back in print.