Duff Guide to Ska Fast Takes: The Selecter/The Beat Split Single "Breakdown" b/w "Side To Side" 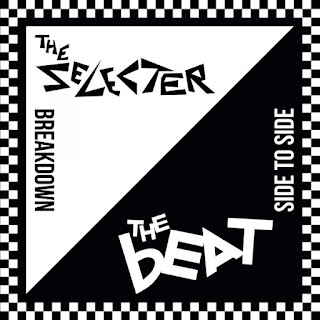 The Selecter/The Beat "Breakdown" b/w "Side To Side" (7" PS vinyl single, DMF Records, 2016): Who would have imagined that we'd ever see a veritable 2 Tone split single of great new material 38 years after the release of the first one? (I'm referring to, of course, the iconic, debut 2 Tone Records release of The Special AKA/The Selecter split single: "Gangsters" b/w "The Selecter.") The occasion for this release is a planned co-headlined tour of the UK and Ireland this spring, but whatever the reason, ska fans should take note and support the 2 Tone era acts courageous enough to move forward creatively (I'm looking at you, too, Madness!), instead of leaning on nostalgia and past glories to win the day.

The Selecter's "Breakdown"--from their most recent album Subculture (read The Duff Guide to Ska review of it here)--is a phenomenal song, very much worthy of being spotlighted in this fashion (and it's awesome live). Here's what I wrote about it in my Subculture review...

Inspired by appalling incidents in both the UK and the US, "Breakdown," the most politically potent song on the album, posits that the relatively frequent unjustified police killings of mostly unarmed (and sometimes handcuffed) black boys, men, and women are a horrific symptom of entrenched racism, societal dysfunction, and purposeful neglect. The failure of government and institutions at all levels to successfully address long-standing issues afflicting disadvantaged communities of color--substandard schools and public services; job and housing discrimination; limited access to health care; grinding and inescapable poverty; crime/addiction; and much more--has created neighborhoods, towns, even entire cities, full of people that have been effectively abandoned/written off. They are "others" apart from the rest of society, who--as the conservative/Ayn Rand-ian narrative goes--through some moral failing/deficit are responsible for their own lot in life (the rich are all self-made men, who achieved great success without anyone else's help, right?)--and, as such, society isn't responsible for their well-being. (It probably doesn't help that the people in these poor communities of color don't have the power to influence or flat out rig the system for their own benefit.)

In these neighborhoods, cities, and towns, nothing functions as it should, including the law and those who are entrusted to enforce it.

Out on the streets
People sending dangerous tweets
For five minutes of dubious fame
So, tell me who is to blame?"

After Pauline Black sings, "Some things are so wrong that nothing ever makes it right," Gaps Hendrickson recites a devastatingly long list of black boys, women, and men unjustifiably killed by police in the UK and USA, starting with Stephen Lawrence and ending with Trayvon Martin, Renisha McBride, Michael Brown, and Tamir Rice (though there seems to be an ever-growing number of new names to add to this list...). "Breakdown" is a "Ghost Town" of sorts for the 21st century (it borrows just enough of "Ghost Town's" structure and snippets of its melody and horn lines to reinforce that notion) and like that iconic song, it reflects the great inequity, fractiousness, and despair of our times.

[I love how this song references "Out in the Streets," which Neol Davies states in the liner notes for Access All Areas was about being young and having nothing to do after the pubs closed at 11:00 pm: "You find yourself driving around the ring road and end up somewhere you wish you hadn't. It was a comment on failed nights out in a city like Coventry--out on the streets again."]

"Dangerous tweets" takes on a whole new meaning with the new American president-elect, doesn't it?

Ranking Roger's UK version of The Beat's "Side To Side" featuring Roger's son Ranking Junior (from The Beat's recent Bounce album--read our review it here) is a terrific, driving ska tune concerned solely with getting the crowd to dance (a la "Ranking Full Stop") and boasting about the ability to do so. This track sports some wicked fast toasting by both father and son--and must be pretty fantastic live.