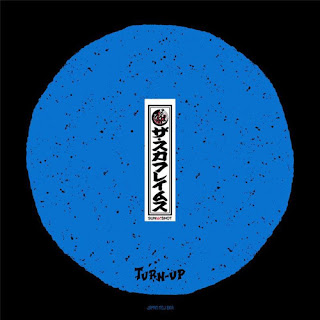 The Ska Flames Turn-Up (vinyl LP, Sun Shot, 2016; a limited number of imported copies are available in the USA through Jump Up Records): While they were relatively dormant for much of the first decade of this new millennium, Japan's The Ska Flames kicked it all back into gear for their 30th anniversary in 2015, when they released a live album and performed several anniversary shows, and (fortunately for ska fans!) have been busy ever since. In addition to two great new 7" vinyl singles (read our review of them here), The Ska Flames recently have released their fifth album, Turn-Up. And like all their records, it's stunning and very much worth owning.

If you've never encountered them, The Ska Flames create and perform vintage 1960s ska/Jamaican jazz in the style of The Skatalites and cut their debut album Ska Fever back in 1989 for Gaz Mayall and his Gaz's Rockin' Records, which deservedly became an instant vintage ska classic. Of course, like The Skatalites, The Ska Flames typically play instrumentals, as is the case on Turn-Up. The whole album is out-of-this-world good, with everything launching on Side A with their muscular ska track "Yanigawa Blues" (which affords many of the players the opportunity to show off their considerable chops), a tight 'n' brisk cover of Charlie Parker's "My Little Suede Shoes," the sparky "Draw the Line," and the plaintive, but gorgeous "Kanchana." "El Camino" (featured on one of their new singles) begins Side B, followed by the playful/cartoony "Cat and Dogs" (with human generated barks and meows), the rocksteady (and what I'm assuming is a love song sung in Japanese) "Oh Babies," a sweet rendition of Bill Doggett's and Henry Glover's 1959 bossa nova cut "Ocean Liner," ending with Fonesca's Afro-Cuban gem "Whisky and Soda."

If top-shelf ska-jazz is your thing, you'd better grab this quickly from Jump Up, as it's usually very hard and horrifically expensive to buy Japanese ska releases.