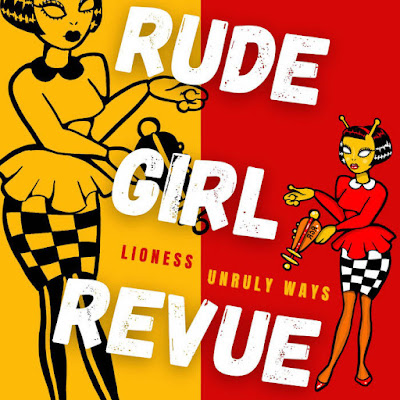 By all accounts, Rude Girl Revue's debut performance at the recent Supernova Ska Festival in Virginia wowed everyone in attendance, and pretty much stole the three-day festival from all other contenders (the vast majority of them, ahem, male). This supergroup comprised of women ska musicians from 12 bands across the country (Kristin, Jade, and Tiffany from The Scotch Bonnets; Jenny from Hub City Stompers/Rude Boy George; Dunia from Dubistry; Dani from Soul Radics; Brittany from Catbite; Ali from Stop the Presses; Marcia and Katie from BowCat; Tara from Half Past Two; Lindsay from Thirteen Towers/The Skluttz; Emily from The Skluttz; Kat from The Pandemics; Tricia from Some Ska Band; plus Tara from the Checkered Cast podcast) was formed to stake their claim in a genre that's been heavily dominated by men; celebrate their role in the scene; and inject feminist messages into the ska mix.

Rude Girl Revue's excellent debut single (Digital, self-released, 2021) features the great rocksteady cut "Lioness" (written and sung by The Scotch Bonnets' Jade Tremba and Lady Hatchet) that both boasts of their prowess and calls for women's solidarity to combat the patriarchy ("To all the lady conquerers/We strike as one/And watch them fall"), while the extraordinary new ska anthem to women's empowerment "Unruly Ways" (written and sung by Jenny Whiskey) decries the ludicrous and sexist rules that society imposes on women, while men are free to do as they please ("Just to love yourself truly is a radical act/And we won't be holding back/It doesn't matter if you're the virgin or the whore/You only get two sides to divide/But you could be so much more!/So, be a bitch, be a slut/Be whatever the fuck you want/'Cause I love you, girl, for your unruly ways!").
While both '60s Jamaican ska and late '70s 2 Tone were often overtly political (addressing racism, economic inequity, and social injustice), American ska--with some very notable exceptions--has been largely apolitical. Perhaps, this marks a major shift in the scene with the women of Rude Girl Revue leading the way...