Duff Review: Kenneth Partridge "Hell of a Hat: The Rise of '90s Ska and Swing" 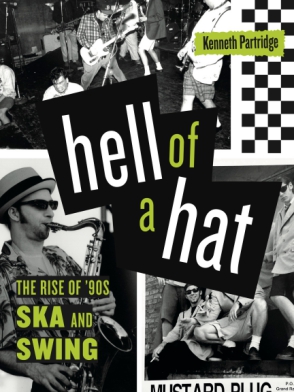 [Full disclosure: I was interviewed for and am quoted in this book, since I was Moon Records' director of promotions, marketing, and production from 1991-1999.]
I'm really of two minds regarding Ken Partridge's Hell of a Hat: The Rise of '90s Ska and Swing (Hardcover, Penn State University Press, 2021). On one hand, it's a very good and engaging read, providing an excellent and oftentimes insightful overview of the bigger, mostly ska-punk, ska-pop, and swing bands that made it relatively big in the 1990s. In doing so, Hell of a Hat focuses on the rise and inevitable fall of acts that made it to major or major-label backed labels and flirted with or achieved stardom, such as the Bosstones, Sublime, No Doubt, Rancid, Reel Big Fish, Save Ferris, Goldfinger, Dance Hall Crashers, Voodoo Glow Skulls, Less Than Jake, Suicide Machines, Buck-O-Nine, MU330, Mustard Plug, Stubborn All-Stars, Hepcat, Pietasters, Slackers, Spring Heeled Jack, The Brian Setzer Orchestra, Royal Crown Review, Big Bad Voodoo Daddy, Cherry Poppin' Daddies, and Squirrel Nut Zippers. During that decade, I was so immersed in all things ska that I knew practically zilch about the swing scene beyond that when ska was declared dead in 1998, swing was the music industry's next shiny thing, and that one of the former members of The NY Citizens was in the local swing band Dem Brooklyn Bums (Chris "Kid Coconuts" Acosta told me about 'em). So, I learned a fair amount from this book--in particular, the Royal Crown Revue's story is pretty compelling, and I had no idea that Gangster Fun's John Bunkley was in Detroit swing band The Atomic Fireballs.

On the other hand, as someone who was directly involved in promoting the ska scene, it's a bit maddening to read a history of this era of American ska and find that Moon Records is depicted as a minor player, almost a footnote, really. The chapter on Moon starts 174 pages in and is done ten pages later, and much of it is devoted to certain bands bellyaching that the label didn't do enough to make them stars, even though nothing of the sort was ever proffered. Though, to be fair, he does mention Moon on page four and describes the label as "a major driver in the ’90s ska explosion." (And I have to admit to being disappointed that Partridge didn't include my tale of how The Slackers' manager at the time allegedly stole Moon's promo list from my apartment office and brought it to Epitaph, where she was made head of Hellcat; we realized the theft/betrayal had gone down when a Hellcat promo mailer was sent to one of our dummy addresses--a fake name, but using Moon's post office box!--that we used to check that our promo mailings went out.) Moon was an indie ska label with a punk rock attitude, just like Lookout or Dischord, and it sometimes managed to punch above its weight--but we never sold ourselves as anything otherwise. Having said that, Moon built the foundation for much of what transpired in ska during the '90s and helped promote/establish dozens of well-known acts when they were in their infancy. No one was championing ska music like Moon was--particularly in the first half of the '90s. I'd wager that if Moon hadn't been around, that decade's ska boom would never have happened.
While there are several key traditional and modern ska bands mentioned in the periphery of Hell of a Hat (who did quite well for indie-label acts), the premise of the book seems to be that only the bands who made it to the cusp of fame or superstardom should make up the story of that era. It's a capitalist's version of the history of American ska, based on record sales and Billboard charts, and it's incomplete (particularly since the music industry really only knew how to market ska that was more punk or pop--and the more mainstream music audiences were only into those kinds of sounds, not 2 Tone-influenced or traditional ska).

Having said all that, if you're a ska-punk and/or ska-pop fan, you absolutely will enjoy Hell of a Hat--it covers that aspect of '90s ska very well and is a valuable addition to the growing library of books on American ska.

If you're in the NYC area on Tuesday, September 28, there is a Hell of a Hat book launch party at Mama Tried in Brooklyn from 7:00 pm to 9:00 pm with DJ Ryan Midnight playing '90s classics.