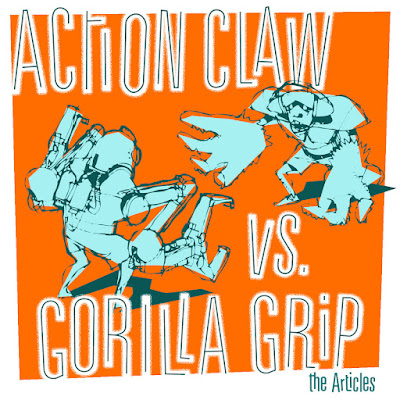 Detroit's mid-to-late '90s ska-jazz greats The Articles--who were often favorably compared to The Skatalites, Jump With Joey, and NY Ska Jazz Ensemble--released their debut album Flip F'Real in 1997 on Moon Ska, which was produced by Victor Rice and featured a mix of fantastic original instrumentals and covers of tunes by Charlie Parker, Thelonious Monk, Joe Henderson, Laurel Aitken, and The Skatalites. [Full disclosure: I had the great pleasure of working with The Articles when I was at Moon.] Tower Records Pulse! reviewer Norman Weinstein gave it four and a half stars and ranked it as the #1 reggae release of '97. While the band appeared on many comps (including Skarmageddon 3, Love and Affection, and the Bang movie soundtrack--all on Moon), they didn't get a chance to release a follow-up album before the bottom fell out on the US ska scene and Moon shuttered its doors at the end of that wild decade.

Unbeknownst to many, The Articles recorded their sophomore album in 2001 with Joe Ferry (he produced two mid-'90s albums for The Skatalites: Hi-Bop Ska and Greetings from Skamania), but the project was mysteriously shelved after completion. That is, until now. After 20 long years, The Articles have liberated their second album from the archives and unleashed the extraordinary Action Claw vs. Gorilla Grip (digital, self-released; limited-edition cassette, Jump Up Records, 2021) on an unsuspecting world. Action Claw vs. Gorilla Grip is full of superb originals and impeccable performances all around, though it's heavily tilted toward the jazz side of the ska-jazz equation (and may remind one of when Tokyo Ska Paradise Orchestra is in their big band/AM pop radio mode). Having said that, there are a good number of ska-ish songs, including the magnificent "Sophist" (which has a great liturgical-sounding organ intro), "Frantic," the slinky, reggae-ish "Jetta Girl,""Hand Me Down" (so cheery as it struts its stuff), "Hard To Get," and the wonderfully epic (and slightly menacing) "Slip'n'Slide." All in all, a wildly impressive album (which would be great to have on vinyl some day...).