Duff Guide Blast from the Past: Little Roy "Battle for Seattle" 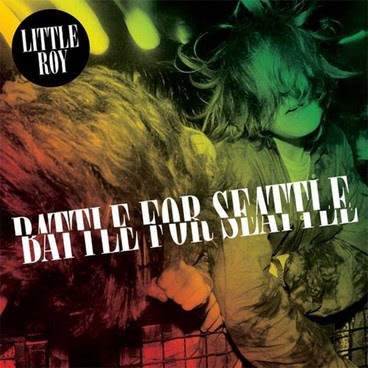 Editor's note: The Duff Guide Blast from the Past is a series of older reviews of exceptional albums that are worth revisiting--or checking out, if you missed them the first time 'round. I happened to pull this album out the other day to listen to while doing my day job, and still find it to be one of Prince Fatty's (and Mutant Hi-Fi's) best productions. I first published this review almost ten years ago on November 11, 2011.
(Review by Steve Shafer)

And that's a key component of what makes Little Roy's Battle for Seattle (CD/LP, Ark Recordings, 2011), a roots reggae album of Nirvana covers, such a brilliant (and completely enjoyable) success. A really well-written song is like a high-performance engine--it doesn't matter what car body you dress it up in, it's still going to drive like mad! It isn't limited by genre. But what really allows Battle for Seattle to transcend the usual shortcomings of a tribute album (mimicking the original artist out of an overabundance of reverence or fear of alienating the fans by deviating too much from the source material) is that this is a fully-realized, whip smart re-imagining--or, more appropriately (in Jamaican fashion, naturally), re-versioning of Nirvana's original tracks. Little Roy and Co. own these tunes.

As a result, it doesn't really matter if you are familiar with these cuts off of Bleach, Nevermind, In Utero, or Unplugged (though this record will probably blow the minds of hardcore Nirvana fans)--the tracks here sound as if they had been originally written as reggae songs (which reminds me--embarrassingly--of when I was a teenager in the '80s and heard Smokey Robinson & the Miracles' "Tears of a Clown" on the radio in Memphis, of all places, and thought, "that's a really good cover of the English Beat!"). Almost from the start, you realize, "Courtney, we're not in Seattle any more!" when the horn line in "Dive" abruptly shifts to incorporate the "Real Rock" rhythm, as if to boldly plant the Rasta colors and claim this territory in the name of Reggae. Clearly, album producers (who came up with this concept in the first place) Prince Fatty and Mutant Hi-Fi put much thought and care into adapting these songs to the reggae idiom. For proof, check out "Come As You Are's" eerie, dubby, Welson organ opening (from the bass line in Nirvana's original, which itself was pilfered from Killing Joke's stunningly furious "Eighties") or the bouncy "Is This Love" Bob Marley-ish arrangement of "Polly" (kind of ironic, since love certainly isn't in the equation here). Even the disposable sexual relationship of "About a Girl" ("I'll take advantage/while you hang me out to dry") is given an almost majestic context with these expansive, echo-throughout-the-landscape horn lines.

One last comment about this album's sound: Battle for Seattle's super warm production by Prince Fatty and Mutant Hi-Fi conveys a clarity and immediacy that are really best heard through a proper stereo from a CD or LP. You'll miss way too much in the compressed Mp3 format playing through your computer speakers or earbuds. Go old school with this one. Little Roy's Battle for Seattle takes all kinds of wild risks in covering Nirvana's almost sacred songbook, but ends up triumphing big time. There are mighty few reggae records this year that can match the full-on glories of this one.