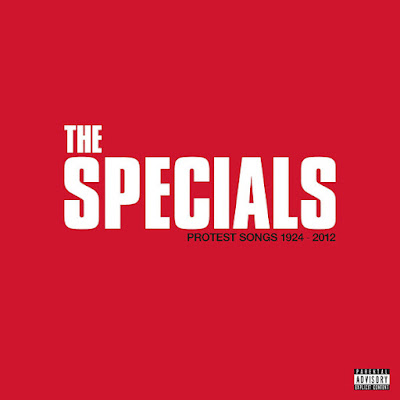 The Specials' new album Protest Songs 1924-2012 (CD/LP, Island Records, 2021)--their follow-up to 2019's excellent Encore (read my review here)--is a strange beast. It manages to be both a powerful and beautifully realized concept album and a huge sod off to their fans. Anyone who has faithfully supported The Specials through its various incarnations and diminishing ranks of original members, lo these 40+ years, is not unreasonably expecting some ska. But Protest Songs adamantly delivers none, though there's folk, blues, spirituals, soul, skiffle, rock, and post punk (having said that, I did catch a bit of ska rhythm guitar in "Listening Wind!"). What's odd is that as you listen through the tracks, it's quite easy to imagine at least some of them recast as ska or reggae songs. So, for whatever reason, the band--Terry Hall, Lynval Golding, and Horace Panter (plus Nikolaj Torp Larsen, Kendrick Rowe, Steve Cradock, Tim Smart, Pablo Mendelssohn, Jim Hunt, Michael "Bammie" Rose, Tony "Groco" Uter, and Hanna Hu)--opted to go in this direction, surely well-aware that it would dash fans' expectations and piss many of them off mightily.

Before the pandemic disrupted everything, The Specials had been planning to record a reggae album in Jamaica--and then the world-wide George Floyd protests erupted in the wake of Floyd's horrific murder at the hands of the police. So, they decided to record a covers album of protest songs in response (and one imagines that the resurgence of white supremacy and worsening cold civil war between Americans and seditious, anti-democratic forces in the US played a part, too), the majority of them by American musicians, as an interim project and to force them out of a post-Covid lockdown creative rut.

Once you set aside your disappointment regarding the absence of ska sounds (though the fact that these are protest songs is very much on brand), you may find that The Specials' Protest Songs 1924-2012 is a terrific album. The choice of tracks (with lyrics that pack a wallop), their interpretations, and performances are uniformly excellent. Some of the songs are direct in their messaging: The Staple Singers' "Freedom Highway" and The Freedom Singers' "Ain't Gonna Let Nobody Turn Us Around" are potent, raucous US Civil Rights Movement-era anti-racist anthems; Rod McKuen's "Soldiers Who Want to Be Heroes" ("...number practically zero/But there are millions/Who want to be civilians") is an anti-war earworm written before Vietnam, but reissued at its height, and relevant countless times since then; Frank Zappa's "Trouble Every Day," written in reaction to the 1965 Watts riots and decrying both the violence/looting unleashed in that neighborhood and ubiquitous racism that led to the social unrest; and Bob Marley's "Get Up, Stand Up" is a general call for solidarity in support of universal human rights--though this quiet, acoustic version sung by Golding seems like something one would pull in on shortwave radio while hunkered down in some secret hiding place as in The Clash's English Civil War. While others are more oblique in subject matter or less-known for being protest songs.
Leonard Cohen's 1988 track "Everybody Knows"--about how everything is inexorably corrupt--was tailor-made for Hall's resigned/deadpan delivery. While it wasn't specifically written as such, it captures the mood of a lot of people in the US (and elsewhere) who want to live in and are working for a more just, equitable, and inclusive world, but are stymied at every turn by those with all the power and wealth:

Everybody knows that the dice are loaded
Everybody rolls with their fingers crossed
Everybody knows the war is over
Everybody knows the good guys lost
Everybody knows the fight was fixed
The poor stay poor, the rich get rich
That's how it goes
Everybody knows
Malvina Reynold's children's folk tune "I Live in a City" seems like a weird choice, but it's a strong endorsement of urban solidarity and multiculturalism: "Brown hands, yellow hands, white and black/All together built this town" (take that, rural MAGA-Again-heads!). And Reynold's proud rejection of American dog-eat-dog capitalism, "I Don't Mind Failing in This World,"  is positively punk rock in attitude, even if it's delivered via gentle folk song:
I don't mind failing in this world
Don't mind wearing the ragged britches
'Cause those who succeed are sons of bitches...

...I don't mind failing in this world
Some people ride in a car so fine
While others walk on a picket line, so
I don't mind failing in this world
One of the cruelest injustices that Black American GIs faced after fighting fascism during WW II in Europe was returning to the US and being subjected to racist Jim Crow laws in their own country (the Nazis based their Nuremberg Laws--their racial purity edicts--and their "Final Solution" on Jim Crow and the American eugenics movement). Blues musician Big Bill Broonzy first recorded his song "Black, Brown and White" in 1947 about this and the general Black American experience with white supremacy (wryly sung here by Golding):

I win sweet victory
With my plough and hoe
Now, brother, you tell me
Whatcha gonna do 'bout the old Jim Crow?

The inclusion of Talking Heads' incredible "Listening Wind" (from Remain in Light and used in The Americans) is an unusual choice--it's a Cold War-era anti-American imperialism cut from the point of view of a African freedom fighter planting bombs to drive out the Yanks from his country (singer Hannah Hu takes lead vocals here). I'm a little surprised The Specials' didn't work in a little of John Holt's "Man Next Door" into their version of Jerry McCain's "My Next Door Neighbor" (essentially a long rant about someone driving you mad by always borrowing all your stuff). Perhaps the most Terry Hall-ish song ever, the country lullaby "Fuck All The Perfect People" by Chip Taylor of "Wild Thing" fame--about prison inmates who have no agency while they do their time ("To sing or not to sing/To swing or not to swing/Hell fills up the silence like chalk on the wall")--was chosen as it "rails against all those people who are So. Damn. Right." (Hopefully, it's not a message to you.)

My imported red vinyl LP included an exclusive and exceptionally good 7" single containing their "Vote for Me" and a cover of The Valentines' "Blam Blam Fever," recorded live at Coventry Cathedral during the 2019 Encore tour. Admittedly, this helped take the sting out of the lack of ska on Protest Songs, but also reminded me of what was missing. One of The Specials' brilliant strengths has been their ability to offer up songs that make you both think and dance--their medium, 2 Tone, is also the message. But Protest Songs, as great an album as it is, obliterates half of that formula and may turn off a good portion of their audience as a result.
+ + + +
Posted by Steve from Moon at 4:37 PM