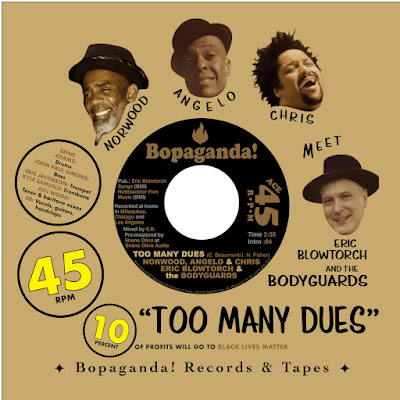 Fishbone's 1988 masterpiece Truth & Soul was largely an exposition on what it was like to be a Black American living in an unrelentingly racist America (see most of Truth & Soul's side two: "One Day," "Subliminal Fascism," "Slow Bus Movin' (Howard Beach Party)," "Ghetto Soundwave," and "Change"). When the album was recorded, a lot of the good that had resulted from the brutally hard work of the Civil Rights Movement and America's attempts at building an equitable and just Great Society was being rolled back during the regressive Reagan '80s. "Slow Bus Movin' (Howard Beach Party)," in particular, was written and recorded in response to the horrific 1986 death of New Yorker Michael Griffith, who was hit and killed by a car as he attempted to cross the Belt Parkway in Queens while fleeing a mob of white teenagers trying to attack him (acts of racial terror didn't only happen in the Jim Crow South). According to The New York Times:

"The events in Howard Beach began when Mr. Griffith, a construction worker, and three black companions traveled from Brooklyn to Queens to pick up his paycheck. Their car broke down late on Dec. 19 on a desolate stretch of Cross Bay Boulevard, and three of the four began walking into Howard Beach. As they were crossing the street, they were nearly bumped by a car in which several white teenagers were riding. Racial slurs were exchanged. The teenagers, joined by other young whites, confronted the black men outside a pizza parlor, New Park Pizza, and chased them.

Timothy Grimes, who was 18, escaped unharmed. Mr. Griffith was killed by a car on the Belt Parkway. Cedric Sandiford, who was 36, was beaten with a bat and other weapons...

...Jon Lester, Scott Kern and Jason Ladone were convicted of manslaughter and assault."
Flash forward 30+ years later and--while some things have changed for the better--much has not. Members of Fishbone (Norwood Fisher, Angelo Moore, and Chris Dowd)--plus Eric Blowtorch and the Bodyguards--still feel compelled to write and record songs about America's unrelenting racism and its abuse and murder of Black people. The terrific "Too Many Dues"--co-written by Eric Beaumont and Norwood Fisher--is an ironically chipper ska/jump blues cut that conveys some real anguish over the high profile murder of Breonna Taylor and permanent disabling of Jacob Blake (10% of the single's profits are being donated to Black Lives Matter). But it's also about the tragic inability of America to live up to its ideals and treat all people equally in every aspect of life--and under the law (we fought a bloody civil war over it and amended the Constitution several times in attempts to do so).
"Breonna Taylor was a healer, but the jailer
Just had to invade her, viciously assail her
Every, every day here to the cross we nail her
The great experiment is a failure

What does a brother have to do
To reap respect already due
To stop the spiteful spew
To not be turning blue?"

On the flip side is the excellent 2 Tone-ish ska track "Mercy," which is a plea for the salvation of humanity, a mantra for our thoroughly horrific times, particularly in these fragmented United States of ours: "Mercy in destabilizer stormtroop’s face/Mercy, mercy when your blood boils over/Mercy to the driver in the bulldozer." It's a mournful track, like something off the Ghost Town EP, but interspersed with joyous and hopeful funk-soul breaks in the choruses. And it's protest music that's not about casting blame, but searching for something that can heal what's broken inside of us, so we won't be at each other's throats, and might even be able to begin to start caring for one other again.
+ + + +
Posted by Steve from Moon at 3:23 PM