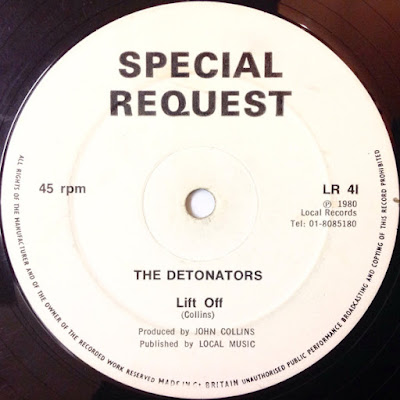 Remastered and reissued for the first time since 1980, the John Collins-produced/co-written 12" single featuring Victor Romero Evans' "At the Club" and The Detonators' "Lift Off" should be of interest to Specials' fans, as it's forever linked to their most brilliant release--the Ghost Town EP.

Back in the day, after the Evans/Detonators record was played on Radio One's "Roundtable" program and favorably reviewed (it also was #1 on Black Echoes' reggae chart at the time), Collins received a late-night call from Jerry Dammers asking him if he might be interested in producing The Specials' next recording. The band was very impressed with Collins' production (recorded on a four-track in the front room of his house and released on his own label) and, in the wake of More Specials' not completely welcome excursion into muzak/lounge and the hi-tech 24-track studio it had been recorded in (that offered Dammers too many choices!), The Specials wanted to capture a more authentic reggae sound for these new songs in a much simpler fashion. And they believed Collins was their man.

When The Specials' met John Collins, they didn't expect him to be white. Lynval Golding and Neville Staple told him, "We were expecting someone like Lee Perry; a wild rasta smoking ganja." Indeed, the seductive Lovers Rock of "At the Club" and mysterious outer space dub of "Lift Off" seem as if they could have come from the mixing desks of Dennis Bovell or Mad Professor, two of the top UK reggae producers back then--and now. (Trainspotters will be interested to know that Victor Romero Evans also played the part of Lover in Franco Rosso’s stellar 1980 film Babylon--an updated Thatcher-era The Harder They Come shot in South London, with a boss reggae soundtrack by Bovell, Yabby U, I-Roy, Cassandra, Aswad, Vin Gordon, and Michael Rose.)

Of these two tracks, the wonderful dub instrumental "Lift Off" is clearly the sonic blueprint for what Dammers wanted for "Ghost Town." It sports a clean, warm, roots reggae sound with electro percussion and trippy synth effects (shades of every B 1950s sci-fi film you've ever seen)--and features the same ghost synth that is later used to open and close "Ghost Town." (To these ears, John Bradbury's drumming on "Ghost Town" and "Friday Night, Saturday Morning" sounds like its programmed, even though it's not; but I think it's a combination of how Brad is drumming--reportedly influenced by Gregory Isaacs' "Night Nurse"--and how Collins recorded him.)
Specials' completists will want to snap up a copy of this (I ordered a copy through Juno.co.uk), but the Victor Romero Evans "At the Club"/Detonators "Lift Off" 12" is worth having in its own right. It's a fantastic slice of early '80s UK reggae that stands the test of time.