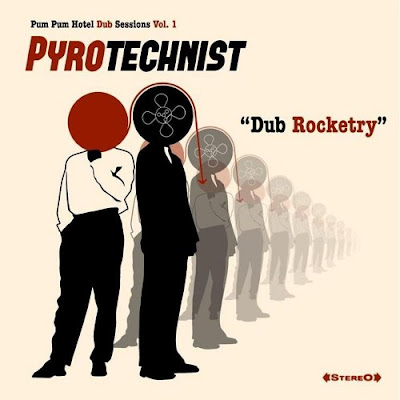 The mad genius behind Pyrotechnist is Nico Leonard of The Moon Invaders, Caroloregians, and Pum Pum Hotel studios notoriety (aided by David Loos on tenor sax and Pierre Haegeli on bass and guitars). With a title like Dub Rocketry, one might expect this album to be filled with the radically deconstructed and reassembled dub of Lee "Scratch" Perry or Adrian Sherwood--but a better comparison would be with the instrumental funky reggae of Jackie Mittoo alternating with Augustus Pablo's (with support from King Tubby) "Far East" dub sound. And like those different approaches, Dub Rocketry is split between moody, introspective dub cuts (such as "Croch'on," "Really Hot Summer," and "Split Second") and shimmeringly bright instrumentals (like "In a Copan Mood," "Groove In," "Sunny Tubby" and "Bye Bye Beach"--shades of The Pioneers' "Long Shot Kick de Bucket"). I find myself putting Dub Rocketry on over and over--and if you're into the aforementioned styles of reggae, you will, too. This is top notch reggae!