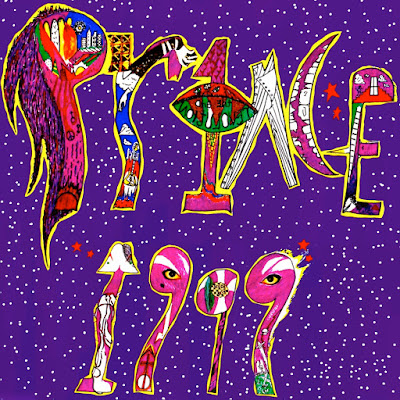 Whether or not I realized it at the time, Prince's 1999--a double LP released in 1982--was one of the first massively popular albums that appealed to every teenager I encountered, no matter what their color, background, or scene. White New Wave/post-punk kids like me loved it, the black girls in my church youth choir whose tastes ran more toward rhythm and blues and early hip-hop loved it, the classic rock suburban white boys who hung out on the periphery of our church youth group loved it--even MTV, which at that point in time didn't broadcast videos by black artists, started being less racist and showed "Little Red Corvette" the love by placing it in heavy rotation. (One of the great things about the early 80s in NYC was how music started to become desegregated on the airwaves--The Clash's "Magnificent 7" and Thomas Dolby's "She Blinded Me with Science" were played on the "urban"-oriented WBLS, while the suburban Long Island New Wave/modern rock WLIR played Grandmaster Flash and the Furious Five's "The Message" and Musical Youth's "Pass the Dutchie." We all felt that great music was great music--the color of the artists' skin shouldn't keep the music from being played...)

After picking up the album--and particularly loving the apocalyptic title track that reflected my fears of dying in a nuclear war--I went down to 8th Street in Greenwich Village and bought a purple 1999 t-shirt with the album artwork on the front and the lyrics to "1999" on the back (though I almost bought The Beat shirt that Sting wore in video for "Don't Stand So Close to Me"--I didn't have enough money for both). I wore it so much that my dad, a full-time college professor who also was a Presbyterian minister (though one without a congregation), took note of it. He innocently asked me if he could borrow the shirt for something that he was working on. That following Sunday, he was the guest preacher at our church in Riverdale and I realized I was in deep trouble--I actually slunk down in the pew where I was sitting with several of the girls I desperately wanted to date--when he unfurled the back of my t-shirt with the lyrics to "1999" from the pulpit and began to warn us off the end-of-the-world hedonism of Prince's song, since there was an afterlife to look forward to with the Father, Son, and Holy Spirit, etc. (I can still hear my dad slowly and dramatically reciting the chorus, "Yeah, they say two-thousand-zero-zero party over/Oops, out of time/So, tonight I'm gonna party like it's 1999.") My friends were mostly kind, but it was a mortifying experience--and, in retaliation, I probably worked on my hedonism (as mild as it was) harder than usual in the following months.

I didn't actually see "Purple Rain" until years later, but really loved the film's soundtrack (as did all the kids from all the scenes and both the black and white radio stations), and listened to all the girls in the youth group rave about scenes from the movie at parties and our Sunday lunches at the pizza parlor or McDonald's. But I did see Prince and The Revolution at Madison Square Garden in August 1986--his first ever appearance there--from the last row in the uppermost deck. We used binoculars to actually see Prince on stage and I remember feeling the great distance between us and the action. My girlfriend at the time didn't hide her lusty enthusiasm for Prince and my (stupid) feelings of jealousy and inadequacy dampened my enjoyment of the show (though I probably wasn't the only boyfriend in the Garden feeling that way)!

Prince's music was a vital part of the crazy, multi-genre and multicultural soundtrack of my youth (all of which was housed under the New Wave label)--and I'll forever be grateful to him for sharing his extraordinary gifts with all of us.

Prince Rogers Nelson will be very much missed. Rest in peace.

Steve – That was a great post! You certainly have a lot of great backstory with Prince, though we come from similar eras. I was just telling a <30 year old co-worker about the notion of "black stations" and "white stations" [cue M+M!] in backwater Orlando, Florida in the 70s and he was incredulous that such things were common back then! It's partially down to Prince at first, and then the rise of hip hop soon afterward that this is a distant memory for old hacks like us and foreign to the new breed. But having your father deliver a sermon on your t-shirt; man that’s cold! I guess he was “just doing his job.” I loved your [admittedly painful] concert anecdote. At least you go to experience him under poor conditions. It beats “not at all” on occasion. [though I still regret that first Simple minds concert – my particular bete noir, you understand!]