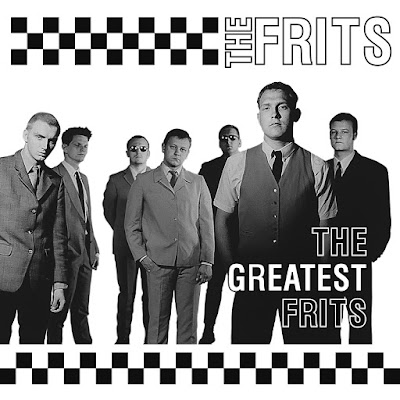 I can't quite remember how I first learned about The Frits--it may have been a review in George Marshall's essential Zoot! skazine--but I know I mail-ordered their releases through Unicorn Records and managed to buy their entire catalogue in the early 1990s (I just checked The Frits' Discogs entry for confirmation--I even have their CD single "Ebbies Bluff," which has their cover of Guns N' Roses' "November Rain"!). Fortunately, you don't have to go to the lengths that I did (going to the bank, exchanging dollars for pounds, and mailing them off with fingers crossed to the UK) to enjoy some of the best tracks from the band dubbed "the German Specials"--they're all collected on the aptly titled The Greatest Frits.

Like the post-2 Tone UK ska scene, which featured the likes of Laurel Aitken, Bad Manners, The Trojans, Potato 5, Maroon Town, The Loafers, King Hammond, The Riffs, The Deltones, and more, the late 80s/early 90s German ska scene had fostered an equally impressive roster of bands, including The Busters, No Sports, El Bosso und die Ping Pongs, The Braces, Skaos, The Butlers, Blechreiz, and, of course, The Frits. What first attracted me to the band was their hyper-charged 2-Tone ska, but what made keep coming back for each subsequent release was their fantastic songwriting and performances, all of which still sound great and vital twenty-five years on.

The Greatest Frits opens with "Life of Brian" (from The Frits' 1988 single of the same name), their inspired cover of Monty Python's "Always Look on the Bright Side of Life," which, like The Specials' cover of "Enjoy Yourself" (released at a time when things were becoming increasingly dire for working class youth and non-white Britons under Thatcher's rule), is cheerfully positive on the surface ("If life seems jolly rotten [I always thought it was, "If life seems Johnny Rotten"!]/There's something you've forgotten/and that's to that's to laugh and smile and dance and sing/When you're feeling in the dumps/Don't be silly chumps/Just purse your lips and whistle/That's the thing/And...always look on the bright side of life"), but is really meant to be taken ironically, since it masks a much more ominous message. (In the movie "Life of Brian," the protagonist has been sentenced to death and is surrounded by fellow condemned prisoners who try to cheer him up by singing "always look on the bright side of life," while they're all slowly dying on crucifixes--it's interesting to note that The Busters covered Bobby McFerrin's similarly-themed "Don't Worry, Be Happy" a year later; and, like The Busters, The Frits sing in English, which sometimes results in awkwardly phrased lyrics, but their meaning is always clear.)

While The Frits' material from their first two albums, Die Erste in 1988 and The Rude Message in 1989, is very strong and is concerned with work, women, and generally not being a dope, the band really hit their stride in 1991 with Little Idiots. After the unexpected fall of the Berlin Wall in 1989 and the reunification of (communist and very poor) East and (democratic and prosperous) West Germany, there was a horrific increase in the number of fascist/neo-Nazi groups and hate crimes, primarily in the former East Germany, which had seen an influx of Eastern European refugees (who were being blamed by the hate groups for the high unemployment and economic hardship prevalent at that time). The Frits' 2 Tone-like response to this worsening situation was to write some of the most powerful and catchiest anti-racist/anti-fascist songs of that era (which, maddeningly enough, are still very relevant in many parts of the world today, including the USA).

The absolutely searing "The Most I Hate Is You" expresses The Frits' equivocal feelings about fascist youth and their neo-Nazi leaders who've lured and trapped them in their twisted, dead-end ideology:

With its irresistible, sing-along chorus, "Bonehead" tries to reach the very misguided--but not irredeemable--knucklehead, to persuade them to stop their violent, racist behavior:

Can't you feel so tall?
You know every trick
To hide your little weakness now
But I tell you
(I tell you)
You are so wrong
Everyone can see your little sign
Saying...

Bonehead, you are going wrong
Listen to the message
The message of this song, yeah
The black man is all right
There is no reason for a fight, see?
Only stupid reasons are for you, all right?"

[There is only one fan-created video of "Bonehead" out there; it uses footage of neo-Nazi and white power skinheads in an attempt to shame them with the sharp lyrics of this song, but I'm not posting it here, as they don't deserve any kind of exposure that could be misinterpreted as endorsing or glorifying their hateful ways.]

"Searching for Another Place in Town" perfectly captures the loneliness and despair of finding oneself an outcast in one's own neighborhood (because of your anti-racist beliefs) and having no other choice but to leave everything you've known behind:

Walking up my home run street I feel so down
Recognize these stupid guys, make me so frown
They never try to understand what is going all wrong
Going on their stupid ways, I never go
'Cause I am strong, yeah

That I'm searching for another place in town
Is because of all the stupid talk of youth
I want you to respect me and all my dreams
And I won't wait while you try to understand..."

It's such an incredibly sorrowful--but ultimately triumphant--track that will haunt you for days after hearing it (I wake up in the night with this one running through my head).

The Frits' following album Not Enough for You (1993), produced by Roger Lomas (The Selecter, The Bodysnatchers, Bad Manners), didn't burn quite as white hot, but they still delivered the goods (see "It's Not Enough for You" and "I Don't Want To Live Alone") and contained some fiercely political songs: "We Fight For You" ("We saw them kill an innocent/We saw them bomb some families and kids/We won't just sit home and wait/We won't just close our eyes and walk away/We fight for you/We'll fight for your rights!"); a cover of Oscar Brown, Jr.'s "The Snake," a jazz/Northern Soul cautionary tale of an act of compassion and charity repaid with betrayal and violence; and The Specials' "Concrete Jungle" with Sir Horace Gentleman making an appearance on bass. The Frits' final (?), live album Always Look on the Bright Side of Live (1994), also recorded by Lomas, showcased the band's considerable live chops (represented here by covers of Specials and Selecter tracks, as well as two Frits originals).

Lastly, there is one terrific newly recorded Frits cut, the defiant "Still Alive," which gives us hope that there may be much more new music to come as long as they're, "On the street/With something to say/Kicking the blues away..."

The Greatest Frits is a fantastic compilation for people new to the band (if you're a fan of 2 Tone, you're likely to be a Frits fan) and will remind long-time followers just how good The Frits were back then--and still are today!

Here's a German translation of this review (courtesy of Google):