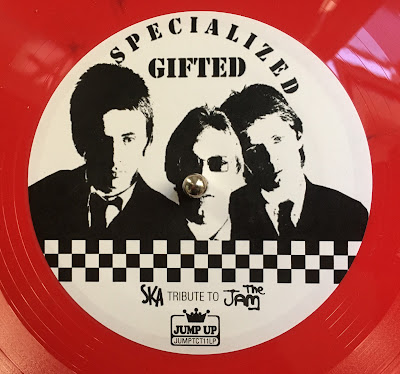 Gifted is the latest in a series of excellent ska tribute/Teenage Cancer Trust benefit CD compilations from Specialized UK, which have been released in part on vinyl by Jump Up in the USA; previous efforts have focused on The Specials, The Beat, Madness, Bob Marley, and The Clash. The selection of cuts on the abridged, vinyl version of Gifted (in its original form, this is a 4 x CD release!) are a mix of The Jam's hit singles (in the UK, at least), b-sides, and album cuts (many from Setting Sons; all of them brilliant)--and the vast majority of the covers here bring something different and compelling to each version of these songs. In sum, Gifted is a powerful and winning set of tracks that do The Jam proud.

Of particular note are the Meow Meows' "Down in the Tube Station at Midnight" (which takes on a whole new level of dread with a woman singing about being brutally mugged/assaulted by right wing goons...and worrying about her wife back at home, since the thugs have the singer's house keys); my old bandmates Rude Boy George's "Town Called Malice" (which decries the meager quality of life and dashed dreams of the masses in Thatcher's England); King Hammond's swinging "I Got By In Time" (with life experience comes wisdom); the Pressure Tenants "Strange Town" (about being alienated in one's own gray and unwelcoming land); Erin Bardwell Collective's very Beatles-y "English Rose"; The Amphetameanies' "Funeral Pyre" (with its allusions to fascist book-burnings--and a chart hit for The Jam just a few weeks before The Specials' "Ghost Town" went #1, when riots tore through many of England's cities, mainly due to high youth unemployment and the police's outrageous and despicable use of the Sus law to harass black people); Los Chicklet's Spanish-sung "Saturday's Kids" ("These are the real creatures that time has forgot/Not given a thought, it's the system/Hate the system, what's the system?"); The Crombies' Joe Jackson-like (think the New Wave ska of his "Pretty Boys") "Girl on the Phone" (concerning the bizarre experience of losing all privacy in the face of fame); The Skapone's "Smithers-Jones" (Bruce Foxton's warning of how workers who play the game and conform to capitalism's rules and societal expectations are ground up and spit out in the end; by the way, Paul Willo shines here!); and Lynval Golding and Contra Coup's wild, dancehall DJ-effects filled "Tales of the Riverbank" (an admittedly nostalgic longing for the innocence and freedom that comes with being very young).

The Jam's songs (and Paul Weller's and Foxton's enormous empathy for their songs' protagonists) continue to be surprisingly immediate and relevant three decades on (and oftentimes they're more accessible, as you can much more easily discern the lyrics in these versions!). Most of all, Gifted reminds the listener that being young and/or powerless in your own cruel and unjust country--when all you want to do is have fun, pursue your dreams, and earn enough to get by--is the same as it ever was...