Duff Review: The Selecter "Live at the Roundhouse" 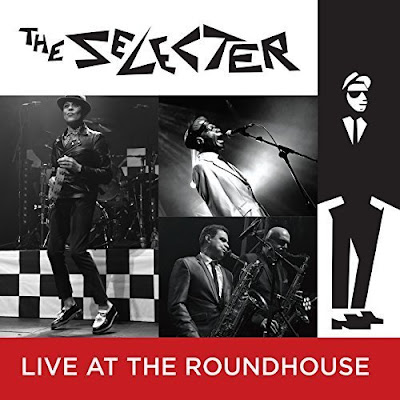 Various incarnations of The Selecter have released live albums over their 38+ year existence (in particular, check out 1992's scorching Out On The Streets with Neol Davies, Pauline Black, Nick Welsh, and Martin Stewart--or 2015's positively amazing Access All Areas, which was recorded in 1980 with all of the original members of The Selecter--read our review of it here) and Live at the Roundhouse captures the current (and really great) iteration of the band in top form, performing stellar tracks from their last few albums (String Theory, Subculture, Daylight), as well as their old 2 Tone chart hits and fan favorites.

Live at the Roundhouse is a real treat to listen to and watch, as it was expertly recorded and videotaped in London on October 6, 2017 before a packed house during a co-headling tour of the UK with The Beat featuring Ranking Roger (they've also released an album/DVD from that night). The Selecter's live versions of "Frontline," "Breakdown," "Daylight," "Remember Me," "The Big Badoof," and "The Avengers Theme" (one of the best TV show themes of all time--and a terrific choice to cover) are of primary interest here, as the other cuts have been recorded live many times over the years. All, of course, sound fantastic. ("Breakdown" expresses outrage at the extrajudicial police killings in the US and UK of unarmed black people, which are a horrific symptom of entrenched racism, societal dysfunction, and purposeful neglect--and "Frontline" calls for everyone to disengage a bit from social media and reconnect with the world in order to take action against injustice; both are extraordinarily powerful and catchy protest songs for our increasingly troubled times.)

In addition to documenting the entire concert, the Live at the Roundhouse DVD features a nice, if a bit scattershot, interview with Pauline Black and Arthur "Gaps" Hendrickson that also manages to highlight their charming, decades-long friendship and easy rapport with each other (Pauline: "I'll always make music until I drop off my perch, I think." Gaps: "I'm in, oh yeah, I'm in. You know, I can't see me doing anything else. You know, here I am. I'm free!" Pauline: "We're too old to go back to our day jobs!").

Having seen The Selecter during their past few visits through NYC, I can certainly attest to their superb, spirited, and all-out fun live shows--and Live at the Roundhouse certainly reflects all of that and more. This one's a must for Selecter fans.