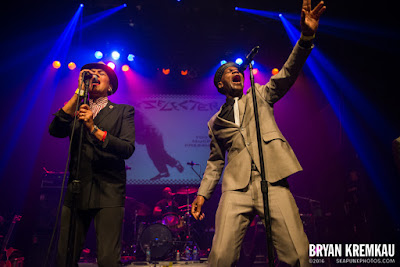 After being blindsided by their surprisingly great show in NYC three years ago, The Selecter featuring Pauline Black and Arthur "Gaps" Hendrickson drew out a wonderfully large contingent of old school stalwarts (Chris Acosta of The New York Citizens/Moon Records, Marc Wasserman of Bigger Thomas, Andre "The Nubian Nightmare" Worrell from Mephiskapheles, Checker Phil) as well as more recent fixtures of the NYC ska scene to Manhattan's Gramercy Theatre, all of whom were eager to hear the tracks from The Selecter's indispensable 2 Tone album Too Much Pressure that have been seared into our minds and held close in our hearts all of these years. I've seen different iterations of The Selecter three times--in September 1992 at Tramps for the Out on the Streets tour with Neol Davies and Pauline, who were backed by Nick Welsh and Martin Stewart from Bad Manners; then back in 2013; and again this week (I don't have a clear memory of catching The Selecter's set with Gaps and Pauline during the 1993 Skavoovee tour they did with the The Skatalites, Special Beat, and Toasters, though I was at the NYC show at the Hammerstein Ballroom and remember the floor actually bouncing while the crowd danced)--and each time The Selecter has put on a fantastic show, though this may have been the best one yet.

Prior to their set, Pauline, Gaps, and band member Neil Pyzer (who plays sax; recorded and produced their last three albums; and is a former member of post-punk band Spear of Destiny) were behind The Selecter merch table and more than happy to chat, sign anything (like the t-shirt I bought--Gaps even sought out Pauline to have her sign it), or pose for pictures (which were promptly posted on social media--see here and here). There is no better way to connect with fans, spread goodwill (we felt the love!), and promote the tour/band/release. Other ska bands take note: Give the people what they want. Fans just want a little bit of your time and attention--and in return they'll buy your stuff and be forever loyal.

Before The Selecter hit the stage, I caught a good portion of dirty Jersey's Hub City Stompers, who performed a great, energetic set of their punky ska and reggae, the highlight of which was their new song with a four-part vocal harmony opening, "Philly WTF"--which posits the question, what's up with their unusual accent? HCS also played a nice tribute--"Distance Water"--to Roy Radics of The Rudie Crew who passed away earlier this year, which had many in the crowd hoisting their tall boys of beer in the air in tribute.

As this was billed as the "Too Much Pressure Tour," The Selecter performed all of the tracks off that album, but not in tracklist order. I thought the renditions of "Out On the Streets," the underrated "Black and Blue," "Missing Words," "Street Feeling," "My Collie (Not a Dog)," and "Danger" were particularly powerful. "Too Much Pressure" segued into Toots and Maytals' "Pressure Drop" and back. One of the few non-Too Much Pressure album songs was "Breakdown" (an excellent "Ghost Town"-like track about societal disintegration that has led to the police killings of unarmed people of color in the US and UK from The Selecter's most recent album Subculture--read The Duff Guide to Ska review of it here), which ended with two snare drum hits that sounded like gun shots, immediately (and brilliantly) followed by the haunting guitar arpeggio that opens the anti-gun "Celebrate the Bullet." Gaps' moment in the spotlight was his song of regret over what might have been in "It Never Worked Out" (also from Subculture). Another high point was an epic version of The Ethiopians' "Train to Skaville" (from The Selecter's 1980 12" of the same name, with "The Whisper" and band's much preferred second studio version of "Street Feeling" on Side B). Pauline introduced "On My Radio" by noting that this hit single wasn't included on Too Much Pressure in the UK, but by the time the record was released in the US, it had been included (along with "They Make Me Mad"). The energy never flagged during The Selecter's hour and a half show and the vast majority of people on the floor danced the entire time (it would have been hard not to). They didn't rely on fan love and nostalgia to carry the night, but performed as if they had everything in the world to prove--and we appreciated The Selecter all the more for it.

At one point early in the Selecter's set, I looked over to my left and was stunned to find that I was dancing right next to music journalist and post-punk musician Vivien Goldman (for a time, she was Bob Marley's PR person at Island Records and was the author of his first biography; she wrote about punk, reggae, and post-punk for NME, Sounds, and Melody Maker; collaborated with a who's who of post-punk musicians on her own recordings and as a member of The Flying Lizards; and is currently an adjunct professor at NYU). I'm such a huge fan of her music and writing that I couldn't resist briefly introducing myself. I told her how much I love the recent compilation of her work and that I wrote a review of it for this blog (read The Duff Guide to Ska review of Vivien Goldman's Revolutionary (Songs 1979-1982) here). She was perfectly lovely and asked me to email her the link to the post (which I did!). Running into Ms. Goldman capped off an already fantastic night.

Thanks to Bryan Kremkau of SkaPunkPhotos.com and ReadJunk.com for the use of his beautiful pix. On a related note, apparently 2 Tone photographer Chalkie Davies also was at The Selecter show taking shots! 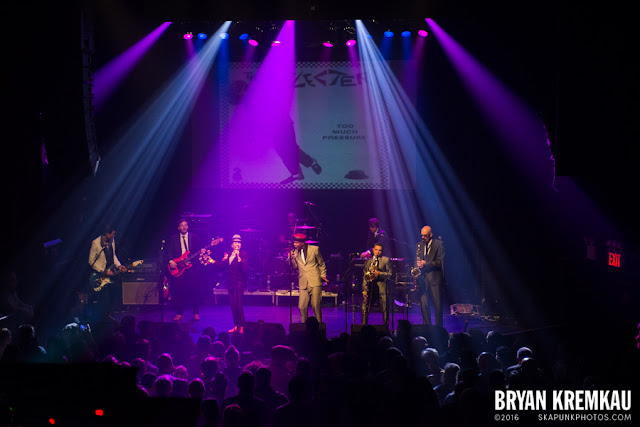