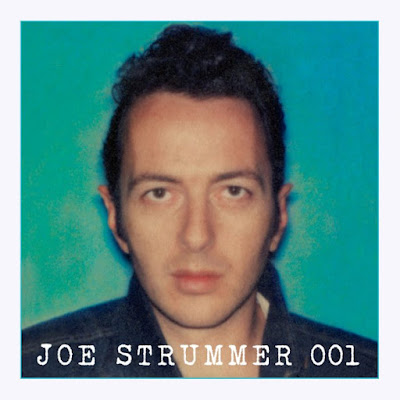 The story goes that after Joe Strummer's death (in 2002 at age 50 from a heart attack), a huge cache of his writings and recordings was discovered in a barn in his backyard, which ultimately yielded the 20,000 items that now comprise the Joe Strummer Archive (apparently he was quite the pack rat-documentarian). The new compilation Joe Strummer 001 is the first batch of freshly buffed material to emerge from the archive, much of it somewhat obscure/hard-to-find (see LP #1) or never released (LP #3 and the 12" single) and will be eagerly consumed by Clash and Strummer fans. But LP #2--containing readily available recordings of Strummer with The Mescaleros, Jimmy Cliff, and Johnny Cash (plus his contribution to Chef Aid: The South Park Album, the Buddy Holly pastiche "It's a Rockin' World")--is a bit at odds with rest of this set, as its seems to be more about re-shaping/re-claiming Strummer's post-Clash legacy than yielding unheard musical gems or rarities. (For instance, they could have swapped out LP #2 out for a cleaned up version of some/all of The Clash Mark II's Out of Control demos (AKA the 1983 Lucky 8 demos) or their legendary live benefit performance for striking coal miners at The Academy in Brixton on December 6, 1984, since that excellent, unheralded band was really more of Joe Strummer solo enterprise anyway. For proof of their greatness before manager Bernie Rhodes' machinations mucked it all up, read Mark Andersen and Ralph Heibutzki's "We Are The Clash" and listen to Crooked Beat Records' Recutting the Crap Volumes I and II. Also anyone looking for a fantastic comp of Joe Strummer and The Mescaleros' music should pick up their Live at Acton Town Hall, which we reviewed a few years ago).

Strummer's so-called "wilderness years"--between the disintegration of The Clash Mark II in 1986 and his finally regaining solid footing again with The Mescaleros in the late 1990s--were filled with a series of short-lived groups and one-off collaborations (and the not-so-great solo album Earthquake Weather); acting in and recordings cuts for art house and Hollywood film soundtracks; a drawn-out legal dispute with Sony; subbing for Shane McGowan in The Pogues; and DJing on the BBC World Service. (In Chris Salewicz's "Redemption Song: The Ballad Of Joe Strummer," he posits that during this period Strummer was clinically depressed--and episodes about the demise of The Clash Mark II in "We Are The Clash" support this assertion.)

The aforementioned unreleased/hard-to-find tracks on LPs #1, #2, and the 12" single have precious little reggae (disappointing, really--and the cover of The Tennors' "Ride Your Donkey" from Earthquake Weather is surprisingly meh) and there's a bit too much Americana for my taste, but the punk, rock, and worldbeat songs are pretty terrific. If you followed Strummer in the late 1980s and throughout the 1990s, you've likely encountered some of this lesser-known material (on LP #1), like "Love Kills" from the "Sid and Nancy" soundtrack, "Trash City" from the "Permanent Record" OST, and "Generations" from the A Punk Look at Human Rights comp (with punk supergroup Electric Dog House, made up of members of The Ruts DC and The Damned). But I've never heard the prime cuts "Afro-Cuban Be-Bop" with The Astro-Physicians (AKA The Pogues, which give this left-field Latin-y/Irish mash-up its Celtic flavor) from the "I Hired A Contract Killer" indie film soundtrack and the rabble-rousing cover of the anti-fascist Spanish Civil War song "15th Brigade" with The Latino Rockabilly War, the b-side to the "Island Hopping" Earthquake Weather single. Oddly, "Sandpaper Blues" with Radar is replicated almost note-for-note on The Mescalero' debut Rock Art and the X-Ray Style (is it the same recording?).

Of LP #2's previously unreleased songs, only "When Pigs Fly" (which nicks a bit of The Supremes' "You Can't Hurry Love") and "Rose of Erin" (both from the indie film soundtrack "When Pigs Fly"), the lounge-y "The Cool Impossible" (think "Broadway"), the Clash Mark II demo of "Pouring Rain" (ragged and impassioned!), and the absolutely stellar rocker "London's Burning" (which was released as a 7" vinyl single that we reviewed recently) are essential additions to the Strummer canon. It's definitely interesting to hear the reggae-ish "Czechoslovak Song/Where is England" demo, though the version from the Lucky 8 sessions--retitled as "This is England"--has much more kick to it (and it should be noted that the UK 12" of this last great Clash single includes two other legitimately good Clash Mark II tracks, "Do It Now" and "Sex Mad Roar"). And then there are other songs from the vault that take up space that could have been devoted to more vital material which was left on the shelves--like the cleaned-up, zydeco-y second take on "Pouring Rain" and the "Sid and Nancy" outtakes (with Mick Jones on guitar) "Crying on 23rd" (a straight-up blues track) and "Bullets" (a country-western cut with Pearl Harbor--AKA Pearl E. Gates--on vocals who, at one point, was spouse to Paul Simonon).

Lastly, the 12" (one-sided) single offers an unreleased Strummer/Jones Big Audio Dynamite composition "U.S. North" (for the indie film "Candy Mountain") that must have been recorded around the time of BAD's No. 10, Upping Street (which Strummer co-produced with Jones; they co-wrote "Ticket" on that album, too). It's a decent song (though far too long at 10+ minutes) and may be the only instance where Strummer sang and played guitar on a BAD recording.

If you're unfamiliar with Joe Strummer's post-Combat Rock years, this compilation does a pretty spectacular job of filling in the blanks. But it may leave the more zealous Strummer/Clash fans less satisfied and hoping that subsequent releases from Strummer's recorded archive will reveal even greater finds.