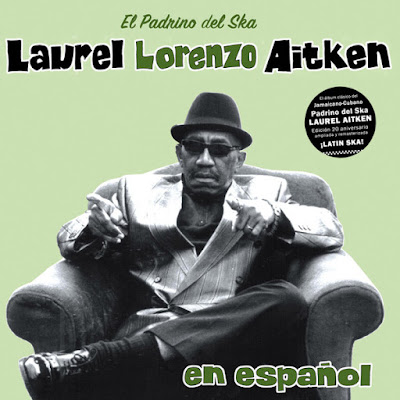 While cycling around Manhattan last week--one of my ways to stay sane during these completely insane times--I stopped off at Rock and Soul, the great DJ equipment and record shop that's been around since the 1970s and was a favorite of DJs in the early NYC hip hop scene, as their record section always yields a few surprising gems that I want. This time round, I unearthed a nice Mighty Diamonds compilation on vinyl, as well as the recent 20th anniversary, remastered, gatefold reissue of Laurel Aitken's 1999 album En Español.

Even though I'm a huge fan of Aitken's, this record didn't really register on my radar back in '99. That year, it was more than evident that Moon's demise was right on the horizon, and all that we had worked to build up over the past decade was starting to crash down around us. My promotions budget had been eliminated and my staff let go, and I left the label that spring, as there wasn't much to do beyond updating the Moon website, and I felt guilty for still drawing a salary. While working a new day job in advertising production, I also was setting up my new digital-only ska/reggae label called 7 Wonders of the World Music in the evenings and on weekends. Since I had closely managed the team that handled the press and radio publicity for Laurel's 1998 US tour (and FedExed him several new pork pie hats along the route, as fans kept swiping them), I spoke with Laurel several times on the phone about doing a non-exclusive license of some of his music with 7 Wonders, but he wasn't really interested in doing mp3s, and wanted an advance that wasn't unreasonable, but one that I couldn't swing. That summer, I caught Laurel backed by The Allstonians performing at SummerStage in Central Park. Afterwards, we talked a bit--it was a fantastic show--and he held and chatted with my toddler son, which was like having the Pope personally bless your child.

Laurel was born in Cuba and lived there until his family moved to Jamaica when he was eleven, so Spanish, of course, was his native language. Yet, Aitken's En Español is his only Spanish language album, recorded when he was 71 years old. Backed by the ace Skarlatines, En Español is a mix of brilliant new songs, covers of popular Cuban, Mexican, and Spanish standards, and reworked Aitken hits from earlier decades. While the new "Negro" ("Black") is an upbeat and irresistible ska track, it reminds me of his more muted "Rude Boy Dream," as both are about being hopeful despite being very down on their luck ("I don't have a mom/I don't have a dad/I'm black, from the inland/And I come to the city/Because I live alone/Full of loneliness/And I'm looking for a woman..."). It's spectacular and deserving of inclusion on any overview of Aitken's later recordings ("Negro" was also issued as a colored vinyl single in the US by Del Corazón Music, which is also distributing En Español in the USA). The other fantastic new cut "Niña Niña" is equally as bright and catchy, even though it's about begging your partner for forgiveness for an unspecified offense ("Girl, girl/You know that I will never leave you/I didn't want to make you cry/I was a fool drinking beer downtown/With my friends/And now I'm crying/You know how much I love you"). All of Aitken's songs are relatively straightforward with uncomplicated arrangements, but they're always packed with memorable hooks, and his singing is so relaxed--seemingly effortless--and self-assured. The man was a prolific tunesmith and consummate performer.

"La Paloma" ("The Dove") may sound familiar, as this 1850 Spanish song about a dove serving as a messenger that conveys a love that transcends the barrier between the living and the dead is one of the most covered songs in history (and it has been featured in the soundtrack of many movies). Laurel's ska take is impassioned and quite lovely. Another instantly recogizable track is "Quizás, Quizás" ("Perhaps, Perhaps") by Cuban songwriter Osvaldo Farrés, which has been covered by everyone from Bing Crosby, Nat King Cole, and Desi Arnaz (who recorded the first English version) to Cake and The Pussycat Dolls ("Whenever I ask you/What, when, how, and where?/You always answer me/Perhaps, perhaps, perhaps"). Mexican songwriter Alberto Domínguez's "Perfidia" (which was popularized by Cuban bandleader Xavier Cugat and entered the ska/reggae canon with Phyllis Dillon's 1967 version) is great, but the selection of something less well-known would have been more welcome. The 1929 bolero "Aquellos Ojos Verdes" ("Those Green Eyes") is by Cubans Adolfo Utrera and Nilo Menéndez and appropriately melancholy for a song about unrequited love ("Those green eyes that I will never kiss").

Of the Spanish language versions of Laurel's earlier recordings, "Medico Brujo" ("Witch Doctor from Amsterdam") was originally recorded in 1977, but remained unreleased until it was featured on the 1989 Unicorn Record comp Rise and Fall: The Legendary Godfather of Ska, Volume 1. "Auge Y Caida" ("Rise and Fall") comes from a slightly lewd 1969 popcorn reggae track that appeared on a Doctor Bird single (and is also on the aforementioned comp). "Ojos Sexys" ("Sexy Eyes") borrows heavily from his 1981 Sunbeam 45 "I Love You, Yes I Do" (which also appeared on his 1990 Ringo the Gringo LP), and his "Sahara" was first recorded with the Potato 5 in 1986 for Gaz's Rockin' Records. All of these are terrific selections and sound great in these renditions.

In a career that spanned over five decades, Laurel never released a bum album, and his En Español is no exception.

For Clash fans: While doing a bit of research on this album, I came across this Aitken cover.