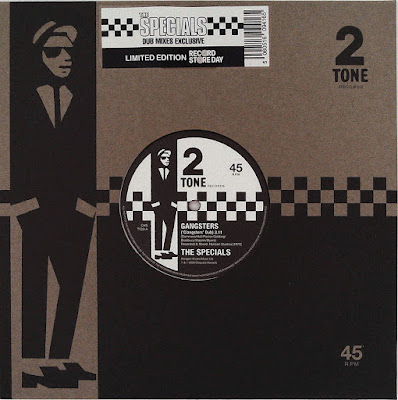 10" vinyl record with Walt Jabsco on the paper label and cardboard label sleeve
2020
(Review by Steve Shafer)
After years of re-issues upon re-issues--and only one 45 with previously unreleased mixes ("Sock It To 'Em J.B. (Dub)" b/w "Rat Race (Dub)"; read my review here)--2 Tone/Chrysalis have finally unearthed some truly remarkable Specials tracks from the vaults that have never before seen the light of day, giving Specials' fans a surprisingly satisfying treat. Issued for Record Store Day 2020 (Drop #3), The Specials' "Dub Mixes Exclusive" 10" EP--featuring "Gangsters ('Clangsters' Dub)" b/w "Too Much Too Young (Piano Instrumental)" and "Why (Dub)"--is a thing of beauty (kudos to all who were involved in putting this together; every detail is right!). All of these alternate versions were recorded and mixed contemporaneously to their originals (1979 and 1981, respectively), which, as my colleagues at 2-Tone.info already have pointed out, is proof positive that the band was interested in pushing the boundaries of their revved-up, trademark ska sound from the very start.
Generally, when one mentions The Specials, you think of something like the fierce and seething "Nite Klub" not dub. Yet, their debut single yielded a fully realized dub mix. Perhaps it wasn't what the average 2 Tone fan wanted/expected in '79 or '80--their live set at the time, captured on the brilliant Live at the Moonlight Club was explosive--but in the ensuing years and decades our musical palates have certainly expanded. "Gangsters ('Clangsters' Dub)" begins with the familiar screeching tires borrowed from Prince Buster, but then everything veers off the expected route from there. A rapid, unrelenting percussive element--a wood block sound likely generated by a drum machine--runs that through the entire track, creating almost unbearable tension, and foreshadows Dammers' incorporation of muzak and more synthesized beats on parts of More Specials. The song's guitar skank drops in and out, and eerie, theremin-like B-movie sci-fi outer space sounds hover at various pitches over the rhythm track (2-Tone.info helpfully notes that 'Clangsters' is a reference to a UK kids TV show The Clangers who communicated via slide whistle sounds). Even in its deconstructed form, "Gangsters" retains its menace.
"Too Much Too Young's" debt to Lloyd Charmers' "Birth Control" is all the more pronounced in this instrumental version's piano line (and Dammers' playful improvisation on the melody is fantastic), plus the subtle touches of organ help remind one of, and honor, the song's skinhead reggae roots. It's absolutely superb.
"Why (Dub)" takes us far from the stripped down, horror show reggae of the original ("Why did you try to kill me?," wrote Lynval Golding after being viciously beaten and stabbed in a racist attack), prominently featuring Rico's plaintive trombone riff (with Dick Cuthell's cornet in there, too), along with Horace Panter's nimble bass work and John Bradbury's super precise percussion. It's a wonderfully inventive version that transforms the song into something strikingly new.
This EP is still available at very reasonable prices and should be snapped right up by Specials' fans, as these mixes are an essential addition to the band's core discography, and provide a fascinating glimpse into their creative process and willingness to experiment. Dare one ask if there's more? And, for Pete's sake, why weren't these mixes released before now?
Posted by Steve from Moon at 4:12 PM