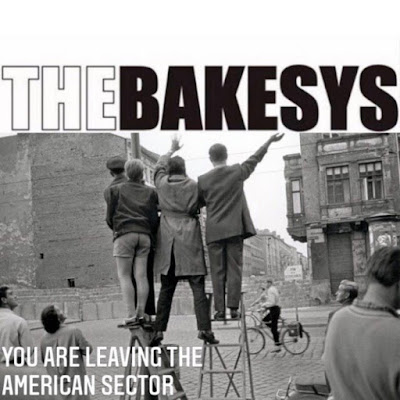 My wife and I just started watching the TV series The Americans, which is about two deeply embedded Russian agents who live in the suburbs of Washington, DC (next to an FBI counter-intelligence agent) and are raising their American-born kids (who have no idea of their parents' true identity) while they spy on the Reagan Administration during the Cold War 1980s. In a funny coincidence, the incredible new single from The Bakesys "You Are Leaving The American Sector" b/w "Bernauer Straße Dub" (Digital, Do the Dog Music, 2021) is about this very same era--and the Berlin Wall in particular. "You Are Leaving The American Sector" is, appropriately enough, a crisp, tightly-wound late-'80s-sounding instrumental track that bends trad ska with modern production techniques, and might remind the listener of something off Maroon Town's High and Dry or Potato 5's True Fact albums. The cut also includes all sorts of clips of interviews of people reacting to the Wall going up in 1961 (and the subsequent attempts of East Germans to escape to the West); one man in the street wonders, "What have we got that they are so afraid of?" Its terrific version, "Bernauer Straße Dub," refers to the street in Berlin where the Wall went up and the East German authorities bricked up all the windows of the apartments that faced the West so their citizens couldn't jump to freedom. Both tracks capture the tension and apocalyptic paranoia of that time, which, in some ways, has never dissipated. On a related note, the late video and multimedia artist Dieter Froese--a wonderful family friend who digitally edited the Super-8 footage I shot for The Toasters' "2 Tone Army" music video at his Dekart Video production house in NYC's Chinatown--had helped a good number of East Berliners escape to the West via a tunnel under the Berlin Wall before he came to the US in 1964.

Spot-on review. You captured all the feels this song inspires. I love how the "found" audio samples intensify that spy-noir atmosphere. A John le Carré novel with a 2-4 beat.