Duff Guide to Ska Fast Takes: The Tellways "Out to the Cosmos"! 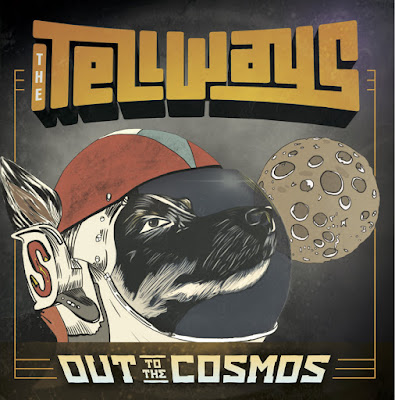 The laid-back, almost understated mid-tempo ska and rocksteady of The Tellways might remind one--and I'm carbon dating myself here--of Easy Big Fella, The Allstonians, Skavoovie & The Epitones, or The Skalars. They're not flashy, but they've really got it going on. In particular, lead singer Rachel Stokes' wonderfully pure alto voice (Chuck Wren is spot on when he describes it as "old timey and sultry," like she's a singer in a classic film noir), and her masterful and seemingly effortless control of her instrument helps make this ace Detroit band stand head and shoulders above the fray. The Tellways excellent debut album Out to the Cosmos (LP/digital, self-released, 2021; also available through Jump Up Records) contains seven new tracks (all by guitarist, keyboardist, producer Eric Mazurak), as well as new recordings of the five songs from their fine 2019 EP Closer to the Fire. Top 2021 tracks include "Anxious" ("If we were living in peaceful times/Then we should all have peaceful minds/Instead, we're anxious"), a theme song of sorts for several people in my household, though in our case I think it's more genetic than environmental; the Calypso-ish "I Don't Need to Tell You," which is about the object of your affection not picking up on your non-verbal clues at all; and the boastful reggae make-'em-dance cut "Tellway Stomp": "Pull the lever on your fever/Burn you up, burn you up/Making you a true believer/Heal you up, heal you up/Transmitter to receiver/Pick it up, pick it up/Treatin' you like you were Caesar/Stick it up, stick it up!"

My favorite cut on the record is "Space Force," which is less about that wacky new division of the armed forces and more the Space Race era (note the illustration of Laika on the album cover) with a bit of Ren & Stimpy's "Space Madness" in the mix:

Our captain's a genius
Tries to appease us
Dark, disconnected
Don't ask him questions

The re-recordings of their 2019 material sound really great. You may have caught the terrific "Closer" on Happy People Records' Rudies All Around, Vol. 2 comp (which you should really check out, since there's so much good stuff on it!), but I'm still most partial to the soul-ska of "Friendly." All in all, this an outstanding debut album.

Email ThisBlogThis!Share to TwitterShare to FacebookShare to Pinterest
Labels: Chuck Wren, Duff Review, Easy Big Fella, Jump Up Records, Skavoovie and the Epitones, The Allstonians, The Skalars, The Tellways

Superb album, nice songs, very detailed sound. Indeed it look like it’s recorded in a smokey pub in the 50s. My favorite tracks are Anxious and Bow to your Sensei.
Did I mention the record is nice yellow?