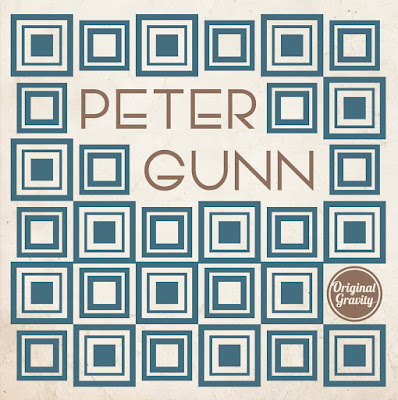 Since I missed out on their first pressings last year, I eagerly snapped up the Original Gravity reissues of the Peter Gunn EP and 30-60-90 EP. If you're late to the game like I was and unfamiliar with the label, Original Gravity is run by musician and producer Neil Anderson, who has a deep love of '60s soul, funk, blues, R&B, Latin, ska and reggae. He has been releasing a series of extraordinarily good singles and 7" EPs of late with what appears to be a rotating cast of collaborating acts, but in reality are Anderson himself performing under different aliases (with several other studio musicians?). Each of these EPs focuses on a choice instrumental cut from the '60s--Henry Mancini's wickedly sinister 1959 theme song for the private eye TV show "Peter Gunn" (which was reworked a bit in 1960 for the theme for the cartoon series "Courageous Cat and Minute Mouse"--I watched it in late afternoon reruns when I was in grade school) and Willie Mitchell's strutting 1969 soul-funk workout "30-60-90"--as interpreted in four different musical styles.

Straight off, all four versions of "Peter Gunn" are smoking hot. Néstor Álvarez's take has all sorts of incredible Latin percussion running beneath the melody carried by the horn section and piano. If R&B's your thing, Chris Baker & The Braveheart's wild version is all buzzy, echo-ey bass and guitar with Booker T.-like organ really working it on top. Prince Alphonso & The Fever turn in a raucous ska version that sounds like something that Prince Buster might have produced with his All Stars had he covered this track. And the lead instrument in Melvin Craig's amazingly funky psychedelic ride is the sitar played by Chinthrinie Wijayakulathilaka, giving the cut a pleasurably intense '60s vibe.

Prince Alphonso & The Fever give "30-60-90" a stately ska makeover (think The Skatalites with Justin Yap producing), while the Brentford Rd Soul Rebels lay down a cool skinhead reggae riddim for Dennis Alcapone to make his exhortations over. Néstor Álvarez again mixes big band horns with jazzy and Latin sounds and rhythms with wonderful results. But it's Curtis Baker & The Bravehearts' Stax-like version that's fearlessly badass and scorching.

These cracking EPs are tailor-made to be part of the soundtrack for your next party or DJ night--whenever those can happen again. (Both singles can be bought via Original Gravity's Bandcamp page or Juno Records in the UK.)