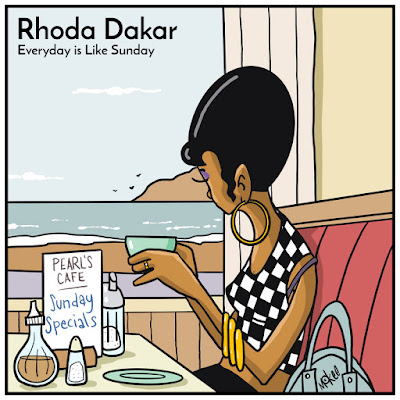 During the dark early months of the Covid-19 pandemic, when everyone was struggling with the new reality of lockdowns, living in isolation, and trying desperately to avoid the virus (with even the hint of vaccines many months away), Rhoda Dakar, like many of us, sought out music that reflected the times and what she was feeling in response. One of the tracks that she found particularly resonant was Morrissey's "Everyday Is Like Sunday" (from his 1988 Viva Hate album; lyrics by Moz, music by Stephen Street), which is about longing for release from drab sameness, unending boredom, and loneliness.

While the original refers to being in a decaying seaside town in England on a Sunday when all the shops and diversions are closed, the emotions of the original were--and still are--painfully relevant to our pandemic times.
Everyday is like Sunday
Everyday is silent and grey
Hide on the promenade
Etch a postcard:
"How I Dearly Wish I Was Not Here"
In the seaside town
That they forgot to bomb
Come, come, come, nuclear bomb

Moz imagined collective deliverance from ennui through The Bomb--the very scary Cold War was still on back then--but our threat of armageddon is more personal. With this plague, we've been faced with the prospect of a never-ending line of individualized, isolated deaths on ventilators tended by medical staff in space suits. Goodbyes to loved ones said over cell phones held by nurses. Thankfully, our release from this nightmare can be found through trust in science and public health--getting a vaccine shot or two and wearing a mask. Not too much to ask to save yourself and everyone around you, is it?

Rhoda Dakar's really great reggae take on "Everyday Is Like Sunday" plus its dub version are being released digitally on April 21, 2021--and an already sold-out 7" single is being issued on Sunday Best Records on July 2. She's backed here by several of her LoTek Four collaborators (read my reviews of their terrific Volume 1 and Volume 2 EPs), including Lenny Bignell (Pama International, Sidewalk Doctors), who also produced the single and dub, and Terry Edwards (The Higsons, Madness).

And do make sure to take a closer look at the single's picture sleeve artwork by Pete McKee and note that the illustrated version of Rhoda is sitting in Pearl's Cafe--a nod, of course, to her duet with Terry Hall on the Dammers-penned More Specials track of that name, also about desperate loneliness: "It ain't easy when there's no one to lean on/It ain't easy when there's nobody there" (plus the song contains these immortal lines: "It's all a load of bollocks/And bollocks to it all!").