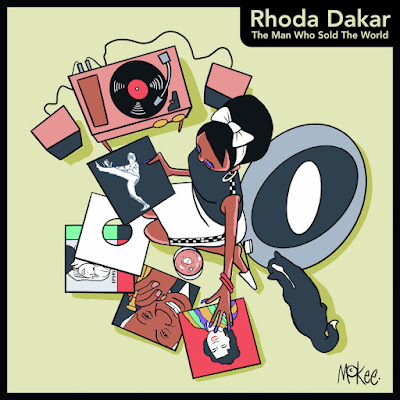 In celebration of what would have been his 75th birthday (January 8), David Bowie acolyte Rhoda Dakar has released a great reggae cover of "The Man Who Sold The World" that captures the wonderful grandiosity, drama, and tension of Bowie's 1970 original, while recasting it so fits right in with her recent output (see my review of her "Everyday Is Like Sunday" single). The song also takes on another dimension in these gender-fluid times, since Dakar doesn't alter the pronouns in the lyrics--which are about a man meeting his spiritual or corporeal twin/self (read a fascinating analysis of this song at Pushing Ahead of the Dame); though it should be noted that Bowie and his Pin Ups-era band backed Lulu's 1974 cover of this track, too (which Bowie and Mick Ronson co-produced). The repeating guitar riff of the original (performed by Ronson) is replaced here by Joff Watkins' harmonica--a fantastic touch--and celebrated reggae keyboardist Roger Rivas also contributes keys. Lenny Bignell's warm production and dub are excellent, as always. And Pete McKee's Clash-referencing cover art tops off a fine, heartfelt tribute to the Thin White Duke.