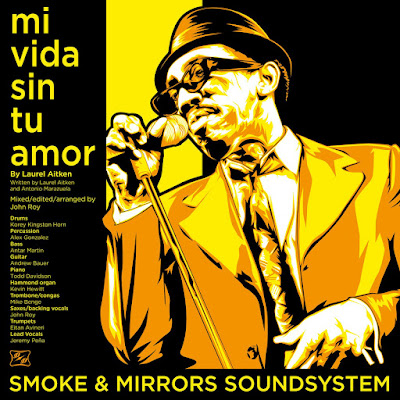 Following hot on the heels of their "Second That Emotion" EP (which I reviewed here), the Smoke & Mirrors Soundsystem--a rotating group of ska superstars under the musical direction of Unsteady's John Roy--rolls on with a fantastic new single featuring covers of songs by Laurel Aitken and the Spencer Davis Group. Aitken's schmaltzy but sweet Latin/rocksteady track "Mi Vida Sin Tu Amor" ("My Life Without Your Love") from his 1999 album En Español (I reviewed its 2019 reissue here) with The Bandulus' Jeremy Peña on vocals is a lovely tribute to the magnificent Godfather of Ska, and something to put on for a romantic slow dance with a special someone ("And now that you are next to me/I will never, never leave you/I don't want to live my life/Without your love"). On the flip side, the Spencer Davis Group's 1967 blues-rock hit "I'm a Man" is transformed into an awesome to behold funky reggae cut, with The Aggrolites' Jesse Wagner singing and Roger Rivas on keys--and everyone involved convincingly sells over-the top lyrics like these:

I got to keep my image
While suspended from a throne
That looks out upon a kingdom
Full of people all unknown
Who imagine I'm not human
And my heart is made of stone
I never had no problems
And my toilet's trimmed with chrome
I'm a man, yes I am
And I can't help
But love you so, no no

And since tomorrow, January 8, 2022, would have been David Bowie's 75th birthday, I'd be remiss if I didn't point you to a preview of Smoke & Mirror's terrific early reggae version of "Let's Dance," which will hopefully see a physical release at some point this year!