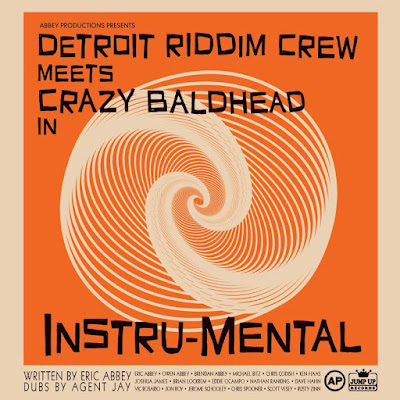 Instru-Mental, the sophomore LP from Eric Abbey's Detroit Riddim Crew, is an entirely different beast from their great debut album Detroit Riddim Crew and Friends (read my review of it here). That record featured ska-ified secular Christmas cuts on the A side and a collection of ska, rocksteady, reggae, and dancehall tracks with a rotating cast of musicians on the B. This time out, the concept is five wonderfully moody Abbey-penned ska and reggae instrumentals (acely performed by members of Mephiskapheles, J. Navarro & the Traitors, Dub is a Weapon, Monkey, Full Watts Band/Uzimon, Pilfers, Unsteady/Smoke & Mirrors Soundsystem, 1592, Dirty Notion, and even a few Abbey offspring) paired with dub concoctions created by Crazy Baldhead (AKA Jayson Nugent)--and the resuts are pretty sweet.

Like its cover artwork that borrows elements from Saul Bass' graphic design work for Alfred Hitchcock's Vertigo, the songs on Instru-Mental have a filmic quality to them. "Dark Dance" sounds like the theme song to a horror movie (think "Nightmare on Elm Street" or "Evil Dead") and it would have fit in well on Mato's phenomenal Scary Dub LP. "Midnight Walk," which was unearthed after two decades in lying in Abbey's archive (or, um, crypt!), is appropriately eerie, particularly in its dub version. "Traveling" is superb Upsetters-styled early reggae and the spaghetti Western reggae "Forward" sports an awesomely dramatic surf guitar solo. And Crazy Baldhead's masterful dub work takes everything to a new level, deconstructing and reassembling the originals in all sorts of clever and electrifying ways.

Instru-Mental already makes on my list of top 2022 releases (can't wait to get my hands on the vinyl), and I look forward to listening to it repeatedly to keep me going no matter what the rest of this year brings.

Erric Abbey is "The Professor" literally when it comes to Music💥💥💥

Erric Abbey is "The Professor" Literally when it comes to music💥💥💥