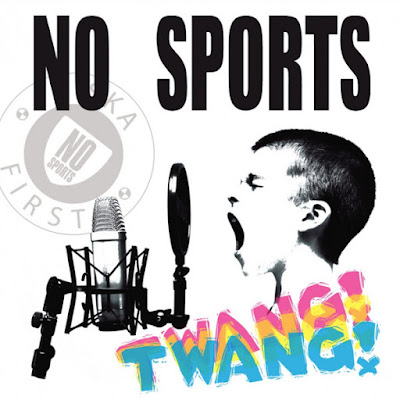 (Review by Steve Shafer)
For the few, proud, and brave (and ska-starved) American ska fans keeping the faith in the late '80s/early '90s, the German ska scene was a marvel to behold, even at a distance. The records from The Busters, No Sports, The Frits, El Bosso und die Ping Pongs (which yielded Dr. Ring Ding when they were done), Skaos, The Braces, The Butlers, Blechreiz (sound it out), and more (see the comp It's a Skandal) that managed to find their way to the US via Unicorn Records mailorder or specialist record shop import bins (like Bleeker Bob's) were extraordinarily good.
No Sports' 1989 debut album King Ska--crammed full of hyper-charged, slightly demented 2 Tone ska songs about trying to get by in a mad world--was one of the finest releases of that era, and its follow-up 1990 EP Stay Rude Stay Rebel (the title track is an anti-racist/anti-fascist anthem for the ages--still applicable today!) was equally as essential (read my review of its recent reissue here; Black Butcher also reissued King Ska, too). 1992's $uccessfools had some amazing songs on it ("Summer," "Five," "Radio," and "Crazy Girl"), but overall, the album wasn't as much of a knock-out as their debut (maybe there were too many downbeat songs?).
I lost No Sports' thread for the remainder of the '90s (apparently they expanded their sonic palate to include non-ska sounds and released No Rules in 1994 and Riddim Roots An' Culture in 1998)--and they broke up in 2002. A version of the band reformed in 2005 as Nu Sports, but then officially reformed as No Sports in 2015. Twang! is No Sports' first new album since the late '90s and it's a very good one.
Like much of King Ska, there is a strong contrarian and absurdist streak running through Twang! The super catchy "Looting" is silly take on the 1960s rude boy record ("We're looting and we're shooting/We're hooting and we're footing/We're faking and we're taking...In shanty town it's all okay/You'd better stand out of my way/And call the police!"). The single off the album should be "Maybe," which swipes The Ethiopians' "Train to Skaville" riff plus a Madness lyric, and is about not caring what anyone thinks about you or what you do, since we don't have enough time in our lives to waste on all that. King Kong returns for a cameo in "The Sacrifice," a dream (or is it?) about the animal world passing judgment on humanity for its tremendous cruelty and abuse of all things great and small--and someone has to answer for all our crimes.
Several of these tracks were clearly written in response to the pandemic. The upbeat and encouraging "No Coincidence" speaks to the "Groundhog Day"-like malaise everyone's feeling stuck in ("Don't give in to your sorrow/Don't give in to you pain/You think there is no tomorrow/And everything is in vain/See the world keeps on turning/Turns around just for you/Keep your passion burning/And I keep burning for you"). And there's nothing like a deadly worldwide plague to make you realize that "Tempus Fugit" (Latin for 'time flies'), we all have an expiration date: "Every minute, every hour/Kronos offers us the chance/So we better use the power/Live life bright and full of prance."

If you loved No Sports back in the day, Twang! doesn't disappoint. And if you like 2 Tone/modern ska but don't know the band, you should grab a copy of this and King Ska as well.