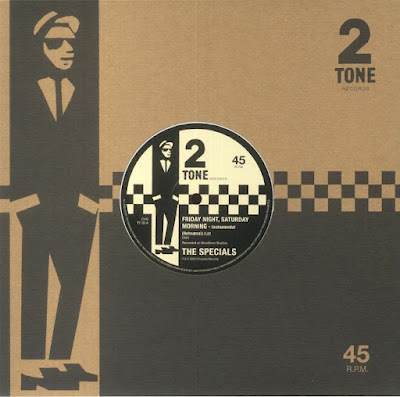 Did you know there was a new Specials 10" single released in the UK this past November on Record Store Day? Neither did I.

I'm not sure how it slipped by without my noticing it. Last week, I was perusing the online 2 Tone Records shop and thinking about when to preorder the newly restored Dance Craze Blu-ray/DVD from BFI (British Film Institute), which for some odd reason isn't available in the US (though the triple-vinyl is). As I was scrolling through the goods (including some Dance Craze totes), I came across the recent 10" rarities from 2 Tone's vaults (see my reviews of Dub Mixes Exclusive and At The Home Organ: Demos 1980-82) and unexpectedly spied a new one: Work In Progress Versions!

This 10" contains The Specials' instrumental rehearsal version of (Terry Hall's composition) "Friday Night, Saturday Morning" and Jerry Dammers at the organ and Horace Panter on bass performing an early take of "I Can't Stand It." While it's probably not worth the casual fan's time to track this record down, diehard Specials followers will, of course, desperately need this in their collection.

Recorded in 1981, "Friday Night, Saturday Morning [Instrumental Rehearsal]" is a brighter, more upbeat version of this song with a shimmering guitar breezily wandering through the vocal line. It's fantastic and something you'll keep returning to. "I Can’t Stand It [Jerry Dammers at the Home Organ with Horace Panter on bass]," a demo recorded in 1980, is out there--and makes the final take of the song on More Specials seem pretty sedate in comparison. This is Dammers unleashed in exotica-land. He uses the familiar, preprogrammed Casiotone-like Latin percussion and many of the cheesier, Muzak-like synth tones on his Yamaha organ (check out his great solo during the bridge!). Ska purists will likely bristle at this (much as they did for side two of More Specials), but it's a fascinating glimpse of where Dammers' head was at during the recording of The Specials' second album. And I, for one, like it.

Considering how long it took to record the brilliant In the Studio (two years at a cost of half a million pounds!), there has to be unreleased Special AKA material to release in the future, right?

Strange that you weren’t able to order the Blu-ray/DVD, not least of all because my order to the states sailed straight through without any problems. Maybe give it a shot again? It's definitely available globally. Good luck!