The Last Reissue: The Special AKA's "In the Studio" Heavyweight Vinyl LP 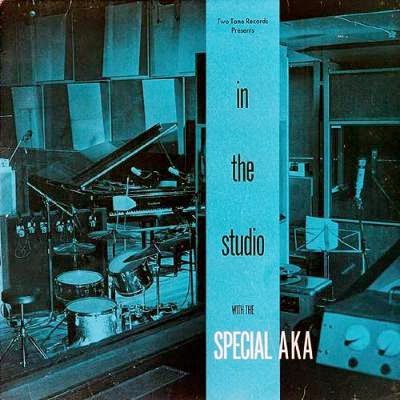 It appears that Rhino's and Parlophone's campaign to reissue all of The Specials' albums on heavyweight, 180 gram vinyl will soon be complete with the upcoming release of The Special AKA's remastered In the Studio album on October 27, 2014 in the UK and on November 17, 2014 in the USA. While used copies of this original LP are fairly easy to find, this will be the first time this record will be back in print since 1984.

According to Paul Williams' "You're Wondering Now: The Specials from Conception to Reunion," The Special AKA's In the Studio took two, very difficult years (during which Jerry Dammers nearly lost his sanity and nearly took John Bradbury, Rhoda Dakar, John Shipley, Gary McManus, Stan Campbell, Dick Cuthell, and Rico Rodriguez with him!) and almost half a million pounds to record, which swallowed up the budgets of the three additional albums that the band were contractually obligated to deliver afterwards. (The This Are Two Tone compilation was released in 1983 by Chrysalis in an attempt to recoup at least some of the money that was hemorrhaging in The Special AKA's never-ending recording sessions). Upon its release, In the Studio generated great reviews, but wasn't the hit Chrysalis or the band needed it to be (it only climbed to #51 on the UK charts)--though "Nelson Mandela" made it up to #9 on the UK singles chart and became a worldwide anti-apartheid anthem.

Back in 1984 when I was still in high school, I picked up In the Studio after hearing the incredible "Nelson Mandela" on WLIR, the awesome new wave/modern rock radio station on Long Island that broadcast to the New York City area. Even though it wasn't a ska album (by then I was used to my former 2 Tone heroes moving far beyond ska; Madness and The Beat had already led the way) and "Nelson Mandela" wasn't representative of anything else on the record, I completely loved it. In the Studio was a compelling, sophisticated, and meticulously crafted mix of no wave jazz, reggae, and soul that grew on you and didn't sound like anything else that was unleashed on the UK pop charts in 1984 (i.e., Wham, Duran Duran, Frankie Goes to Hollywood, etc.). The album was claustrophobic (see "Night on the Tiles" and the jab at "Housebound" agoraphobic Terry Hall), full of righteous outrage (see "War Crimes," which was about Israel's invasion of Lebanon), brutally uncompromising in its principles (see "Racist Friend," which urged you to completely disassociate yourself from anyone, friend or family, who held racist views), and yielded what may be the catchiest protest song ever written and recorded, the euphoric hit "Nelson Mandela" (pleading for the release of the ANC leader who had been jailed by the apartheid South African government for decades)--the one moment of pure joy on record that often found the world to be a terribly and disappointingly ugly, petty, predatory, and unjust place (see "Alcohol," "What I Like Most About You Is Your Girlfriend," "Bright Lights," "Lonely Crowd," and "Break Down the Door").

In the Studio wasn't the hit pop album that the Chrysalis execs pined for (while facing down all of that red ink on their spreadsheets) or the ska album that Specials fans were expecting following the brilliant Ghost Town EP (though their hopes would have long been dashed by the string of decidedly non-ska singles from this album that preceded In the Studio's release). The Special AKA--defiantly led by Jerry Dammers--stubbornly refused to give the people what they wanted, but delivered what they thought they needed to help them navigate increasingly desperate times. Thirty years on, In the Studio sounds as strikingly unique and innovative as it did in 1984--every song is stellar--and its lyrics still contain their sting and relevance. The music and its messages endure. I only wish that The Special AKA could have found a way forward. I suspect that there was much more musical brilliance to come.

Here's a live performance of "Nelson Mandela" by The Special AKA (but without Stan Campbell, who had left the band by then) with Elvis Costello, Ranking Roger, and Dave Wakeling that was taped for The Tube in 1984.

And here's the fantastic (and hilarious) video for "What I Like Most About You Is Your Girlfriend"...