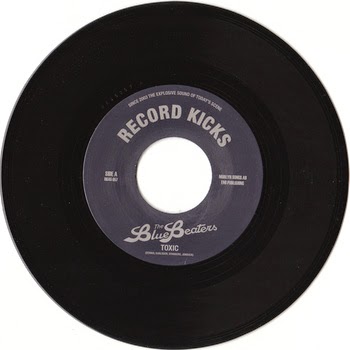 While I can honestly say I hadn't knowingly heard any version of Britney Spears' 2003 hit "Toxic" until dropping the needle on The Bluebeaters' 7" single containing their wickedly fierce cover of it, I've got to admit that the original is a truly great pop song--I've just watched the borderline NSFW "Toxic" video for the first time tonight...and now feel dirty! (My only excuse for being this out of touch was that 2003 was a particularly tough and weird year for me.) A well-constructed, catchy pop song should lend itself to being interpreted--and still sound great--in whatever musical genre you like (apparently "Toxic" has been covered by many bands of various musical stripes--including Hard-Fi, who mash it up nicely with The Clash's version of Vince Taylor's "Brand New Cadillac") and The Bluebeaters' vintage ska stomp of "Toxic" is nothing short of stellar.

The flip side, "Catch That Teardrop"--and I only know this from reading about it on Record Kick's site--is a Northern Soul track, originally recorded in 1962 by The Five Royales from Winston-Salem, NC. And The Bluebeaters deliver another fantastic Skatalites-like cover with it (and certainly know how to pick great original tunes to play, both famous and obscure).

Here are the lyrics to the chorus of "Toxic" that you'll find yourself singing days from now (get your falsetto in shape!)...

Email ThisBlogThis!Share to TwitterShare to FacebookShare to Pinterest
Labels: Duff Review, Hard-Fi, The Bluebeaters, The Clash, The Five Royales